Dana White went on Sportscenter to announce the movement of UFC London next week and that the rescheduled events previously set at the UFC Apex will now find a new venue.

“We’re not stopping. We will keep finding a way to put on the fights.” pic.twitter.com/7ixxpFjTSz

Dana White went on Sportscenter late Saturday night to announce that next week’s event in London would not continue as planned due to newly imposed travel bans and would be moved to a different location, presumably somewhere in the United States.  Furthermore, the previously announced events set for the UFC Apex on March 28 and April 11 will no longer take place in Vegas after the ruling of the Nevada State Athletic Commission to revoke all licenses until March 25 due to concerns over the coronavirus.

While the NSAC’s decision earlier Saturday did not directly impact the UFC, it did put the promotion in a precarious position.  The NSAC ruled to revoke all licenses indefinitely and ruled that they would reassess the situation on March 25. If the NSAC were to decide at the March 25 meeting to continue not holding events out of concern for public safety, it would have left the UFC scrambling to find a new venue just 72 hours out from fight night for their March 28 card.

“I’m in the fight business, I’ve been doing this over 20 years, and this stuff happens to be every weekend,” White claimed, before adding “not on this level obviously. But this is what we do, and we always ensure that the fights happen, and they’re going to continue to happen.”

The UFC President also said that the promotion was seeking a new location for UFC 249 which is set to feature the highly anticipated fight between Khabib Nurmagomedov and Tony Ferguson.  White said during his appearance that he expected to have two new venue options for the events by 10am on Sunday morning.

“That fight will happen. It will go on. The fans are all freakin’ out about that. Do not worry. Khabib versus Tony will happen,” he proclaimed.

“The fans are all freakin’ out about that. Do not worry; Khabib versus Tony will happen.”@danawhite says only a “total shutdown of the country” would lead to fight cards like #UFC249 being canceled. (via @SportsCenter) pic.twitter.com/pliGtv4wc1

White also stated that barring a complete shutdown, the company did plan to continue with all of their scheduled events.

“Unless there’s a total shutdown of the country where people can’t leave their houses, these fight will happen. We will find venues and they will happen. The only thing that will stop us is a complete shutdown and people are contained in their homes.” 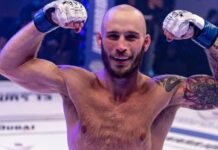 Welcome to the UFC: Sasha Palatnikov