Norfolk, VA — Sean Brady opened up the UFC Norfolk card a perfect 11-0. Despite that, he was the underdog, at least as viewed by many, heading into the fight. Happy to prove the pundits wrong, he exited the arena 12-0.

Speaking to media outlets including Cageside Press post-fight, Brady admitted to scouting his opponent, Ismail Naurdiev, heavily. “We watched so much tape on him. We knew he’s super strong in the first round, and he tends to fade,” he said. That’s almost exactly what transpired. “So I knew going into the second and third round, he was going to get tired. He throws a lot of power behind everything he throws. He’s really just trying to kill you the whole time. I know how that is, it tires you out.”

“I knew getting past the first round might be a little tough,” added Brady. “I knew going into the second and third, I was going to be able to impose my will and impose my game plan. That’s what I did.”

Brady hails from nearby Philadelphia, and had a sizeable contingent cheering him on in Norfolk. His girlfriend probably stood out above anyone else in the arena. “She probably wanted to get in there and fight herself. I think she wanted to fight a little bit more than me. She might have to change careers,” he joked.

During the fight, he had to deal with a number of knee attempts from Naurdiev, flying and otherwise. It’s something he mentioned to his coaches even. “I was like ‘three of those knees just passed my face.'” None of them hit home, however. “I seen them coming. I knew he threw wild flying knees and spinning stuff, that’s why I wasn’t circling too my right. Because he likes throwing that wheel kick, and I knew that knee was going to be coming up the middle. So I tried not to shoot too much in the middle, because I didn’t want to get hit with his flying knee.”

While Brady didn’t get the finish, a tight guillotine made it close at the end of the fight. “I think I could have got it, and I think I probably could have finished him with some ground n’ pound,” he said. “But it’s so much different in there than in training. I finish people in training all the time with ground n’ pound and submissions. Like a lot. but my forearms are still crazy arm-pumped from the fight. It’s just a different feeling in there. The more fights I have I think I’ll keep getting over that. I’m super young in my career, I’m 12-0, and I just want to keep building on this and getting better and better every time.” 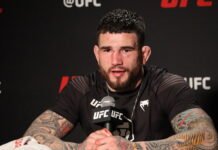