RIZIN 21 went down in Hamatsu, Shizuoka in Japan on Saturday, with top prospect Mikuru Asakura topping the card.

It was easy enough a card for fans in the west to miss (or sleep through), but RIZIN 21 offered some pleasant surprises for fight fans around the globe. The Japanese MMA outfit, known for cards that can best be described as excruciatingly long, managed to quicken the pace in Hamamatsu, with just one intermission, and a short one at that.

In the main event, Mikuru Asakura continued his push to star status with a TKO of Daniel Salas. Albeit an opponent Asakura was expected to defeat, the method in which he sealed the deal — set up via a head kick — proved that the Japanese fighter can be relied upon to entertain.

After the bout, an apparent match with Kotetsu Boku, a former ONE Championship lightweight champ, was lined up.

Also on the card, DEEP and RIZIN regular Roque Martinez finished off another ONE alum, Hideki Seine, at heavyweight — sealing the deal with soccer kicks.

Full results from the card, and a gallery of highlights, can be found below.

RIZIN 26: Satoshi Yamasu vs. Mikuru Asakura — Under the Radar 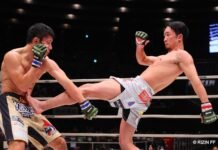