That makes it two wins in a row for Perez, who told reporters including Cageside Press following the bout that “I always, always, always envision myself winning.”

“It doesn’t matter how,” he added.

Coming off the win, “it’s a great feeling,” said Perez, who improved to 23-5 on the night. “People don’t understand, this is my life, this is what I do for a living. I don’t have another job. I literally train. My other job you could say is I teach classes at the gym, and help coach. But I’m around fighting all the time.”

The submission finish might be seen as putting the rest of the flyweight division on notice. But, Perez said, “I always tell people ‘I can care less about what people think of me.’ If I cared what people thought about me then I’d be like everybody else. I don’t care, you can talk sh*t, you can talk sh*t about my fighting style, you can make fun of me, whatever it is. I can care less what my division thinks of me. I know what I can do, and I know what I bring to the table.”

The key, moving forward, said Perez, is to “keep winning fights. I want to rematch [Joseph] Benavidez. But it’s crazy, you see people that lose and try to rematch those guys right away.” Perez, who lost to Benavidez via TKO in November 2018, is taking a different approach. “Keep my mouth shut, keep working toward that goal and I will get there eventually.”

In the meantime, added Perez, one fight that does interest him is UFC 246 winner Askar Askarov. 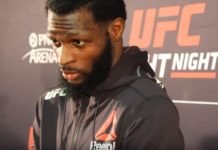