Los Angeles, CA — Former bantamweight champ Darrion Caldwell was all business going into Bellator 238. Faced with the undefeated Adam Borics in a featherweight grand prix quarterfinal, a lot was on the line.

Caldwell (15-3) acquitted himself well, however. He earned a submission win off a rear-naked choke early in the first round of the co-main event fight.

“I told him I’d do it in under two minutes, it was like 2:20,” a clearly upbeat Caldwell said post-fight, speaking to reporters including Cageside Press. At the suggestion he was a little out of position for the choke, mainly his legs, Caldwell replied by saying “My body was right where I wanted it to be. I think I opened him up with elbows, forced him to give up his neck.”

Asked for his thoughts on McKee, Caldwell admitted that “I think exactly what you guys think. He’s good, he’s 14 or 15 and 0 for a reason. But I’m the guy to beat him, I’m the guy to beat [Patricio] Pitbull. I’m going to be a champion at featherweight in 2020.”

That would add him to the select list of champions who have won gold in two weight classes in the Bellator cage — a list that includes Joe Warren, Patricio Pitbull, and Ryan Bader.

Caldwell has not forgotten about Bellator featherweight (and lightweight) champion Pitbull, who opted not to fight the ex-bantamweight champion this round. “I might just pop up on that Pitbull fight [in March]. Since he don’t want to fight me, I got to find a way to fight him. We’ll see. If he wins that fight, I’ll let him slide, but if he lose, I’m digging him in the sh*t. I’m running in his grill.”

On what he can take from his past fights to apply to McKee, Caldwell said that “you can’t use this win to fight A.J. McKee. I can’t use the win against Henry Corrales to come and beat Adam Borics. I just take it day by day and do what I do. And that’s beat fools up, honestly.”

Nor does he focus on the other guy while in camp. “I don’t focus on what my opponents do. I just focus on what I do. At the end of the day, it’s me against me. And that’s it.”

He admitted, however, that overall, there is strategy involved. “Obviously you got to game plan. And my team does a great job of that,” Caldwell allowed. “And so, I do no thinking. They pretty much lay it all out. They lay the ground rules, and we follow it. We were prepared for the knee. We were prepared for the broomstick 1-2s that he had. But at the end of the day we focus on me, and when we focus on me, these type of things happen.”

“The work ain’t done. We got two more wins to get that title, and A.J. Mckee is next on that list,” he added.

There’s a notion of late that Caldwell fights better when he feels he’s the underdog. People certainly seemed to write him off after a pair of losses to Kyoji Horiguchi (conveniently forgetting how talented the Japanese fighter is). Caldwell seemed to agree with the notion.

“I’ve been an underdog pretty much my whole life. Whether on the football field, going to nationals, wrestling an undefeated guy, coming in tonight against a 14-0 guy,” he explained. “I’ve always played the underdog role. I thrive there. When people think they’re going to let me slip under the cracks, I’m the guy that’s going to step up and make something happen.”

A lot of that, he said, comes from his upbringing, with three brothers. “At the end of the night, mom puts four plates on the table, whoever last gets the least amount of food. I grew up scrappy, I grew up fighting. It’s just my nature.” 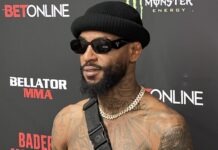