Raleigh, NC — The third time was the charm for Michael Chiesa in the welterweight division. On Saturday night at UFC Raleigh, the Pacific North West fighter known as “Maverick” made it three for three inside the UFC’s deep 170lb weight class.

Against his toughest opponent yet. Wins over Diego Sanchez and Carlos Condit were far from easy, but Rafael dos Anjos, who Chiesa threw down with in Raleigh, was a former champion at lightweight. A man who had challenged for (interim) gold at welterweight. An all-around veteran of the sport. Still, Chiesa took home the unanimous decision win.

Chiesa knew exactly what he wanted post-fight. “I’d like to cut this interview short and call out my next opponent,” Chiesa said inside the octagon, giving Daniel Cormier the cold shoulder. “Colby Covington, I’ll see you in July.” Exit stage left.

Speaking to media outlets including Cageside Press backstage following the bout, Chiesa was a little more forthcoming, explaining why ‘Chaos’ is the next fighter in his sights.

“I just beat the number five ranked guy in the world,” explained Chiesa. “I always say the most important time to ask for a fight is after you win. You’ve got to capitalize. I’m not out to engage in some verbal pissing match with the guy. I respect his skills, he’s super tough.”

At the same time, however, Chiesa’s goal is gold, and facing tough opponents is a prerequisite for getting there. “I’m just trying to get to a world title, and I think that’s the fight that makes the most sense when you look at the top five,” he continued.

“I said before the fight, ‘I beat Rafael dos Anjos, I’m not fighting anybody less than five.’ I’m taking his spot, and just looking at the landscape of the division, that’s the fight that makes sense.” Not only does it make sense, it might actually be the only option.

A glimpse at the UFC’s official rankings shows only Leon Edwards, Jorge Masvidal, Covington, and Tyron Woodley ahead of RDA. Woodley and Edwards are booked opposite one another. Masvidal is circling either a title fight with Kamaru Usman, or a spectacle with Conor McGregor.

“I want to be tested, I want to fight the best,” added Chiesa. “So Colby it is.”

Chiesa didn’t fully know who he planned to call out until a few weeks before UFC Raleigh. “I kind of waited to see how 245 ended,” he admitted. He also wanted to see what happened with Tyron Woodley and Leon Edwards, who will throw down at UFC London this March.

There’s a reasonable chance Chiesa gets his wish in the long run, something that factored into the callout. “I wouldn’t go ask for some outlandish match-up. Any time I’ve won a fight and asked for an opponent, I’ve usually got it,” he stated, “and that’s because it’s well thought out. I just don’t throw things against the wall that aren’t going to stick. I think it’s a fight that makes sense, I think it’s a fight I can get, so we’ll see what happens.”

A battle with a former title holder in the weight class — interim or not, stripped or not — would be a huge fight. And would show that Chiesa is here to stay at welterweight, not that he has any thought of ever leaving.

“This is just the right weight class for me. Even if I had come up short tonight, it wouldn’t have changed my mind to go back down,” Chiesa about the feeling at 170lbs. For what seemed like years while he competed at lightweight, Chiesa was dogged by suggestions that he move up to 170. A 2018 miss at the scales ahead of a fight against Anthony Pettis finally forced him to pull the trigger.

There are plenty of reasons to stick at welterweight anyway. “In my opinion, this is one of the most prestigious weight classes in the sport,” Chiesa said. Rattling off names like Matt Hughes, Georges St. Pierre, and Pat Miletich, Chiesa opined that the division was as prestigious as any outside heavyweight, historically.

There’s more too it than that, however. Even a 165lb division wouldn’t lure Chiesa back down, he said. “I’d go 175 before I go 165. I like feeling good.” There’s a mental edge to being at 170. “At least for me, what that weight cut really messes with is my confidence,” Chiesa revealed. If you’re one of those who believe the fight game is half mental, you can see what a huge factor that is. 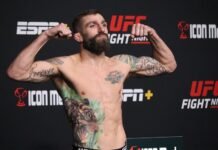