Darrion Caldwell became the first man to defeat Adam Borics at Bellator 238. Advancing in the featherweight grand prix as a result, he’ll look to do the same to AJ McKee.

The featherweight grand prix continued on Saturday at Bellator 238. A million dollars on the line to the winner of the tournament. The chance to claim 145lb gold. Bragging rights. In quarterfinal action, Darrion Caldwell and Adam Borics faced off, to determine who would move on to the next round.

Borics was a perfect 14-0 to start the night. Caldwell a former bantamweight champ seeking to conquer a second weight class.

Caldwell opened the festivities with a kick to the body. He stayed outside, circling. Then moved in, closing the distance and throwing hands to open up the takedown. He landed that, and avoided a guillotine attempt by Borics with ease.

How ‘The Kid’ responded to a high-level wrestler like Caldwell was bound to be telling. In short order, Caldwell had trapped one of Borics’ legs with his own, and was dropping elbows from the back. He also had one of his opponent’s arms trapped. Caldwell then got under Borics’ neck, setting up the rear-naked choke. Borics looked beyond uncomfortable, and after a moment was forced to tap.

After the fight, Caldwell could be overheard telling a clearly dejected Borics that he’d be a champion one day.

“This is my night this is my tournament,” Caldwell said post-fight, before making a couple of callouts. Including a one-on-one game with Shaq. Probably a losing proposition. He also called out ex-UFC welterweight champ Tyron Woodley, for a rap battle, apparently. “T-Woodley, you can’t rap, I got more bars!” he exclaimed.

On a more serious note, Caldwell also called out AJ McKee, who was in the cage following the fight. The pair will throw down in the featherweight grand prix semi-finals. “I see this man over my shoulder, looking to the left. You want some, come get some!” yelled out Caldwell. The pair faced off before exiting the cage. 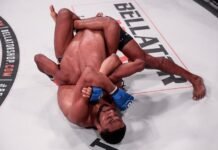 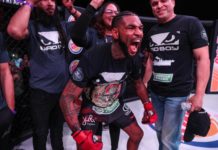 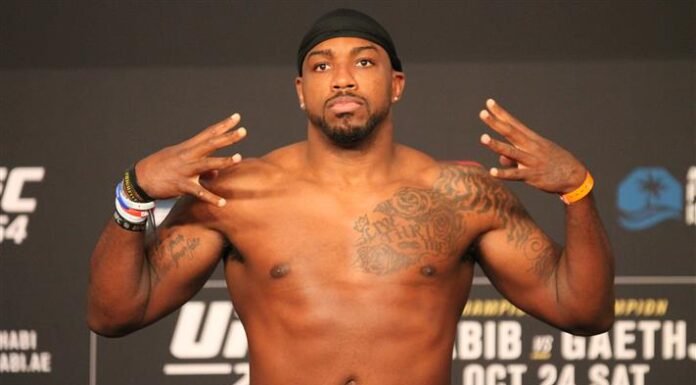