Los Angeles, CA — There are big things brewing for Scott Coker’s Bellator MMA. Ahead of Bellator 238, the promotion’s kick-off show for 2020, Coker had some exciting news.

“We have a 30-fight season coming up, which we will announce shortly. Eight of them will be international. The rest of them will be domestic,” Coker told media outlets including Cageside Press on Thursday.

Bellator 238, for one, “will air live in Brazil on ESPN,” Coker added. “The deal was just cut this morning. We also have distribution throughout the Latin American territories.”

Part of the broadcasting switch-up is a result of the promotion’s deal with Fox Sports in the territory coming to an end, combined with the purchase of Fox by Disney. “Eventually, there will be no more Fox Sports,” Coker suggested.

The star of the show this weekend will be Cris Cyborg, one of the biggest names in Brazilian MMA currently. “She’s the greatest female fighter of all time,” Coker said. He’s worked with Cyborg a long time. Worked with female fighters even longer, back to the days of three-round fights for females, Coker recalled.

“Cyborg was one of the first fighters we put on T.V. as the main event. To me, she’s an icon in the sport, and any time you can sign an icon to your roster, you’ve got to go do it,” Coker added.

When it comes to the women’s featherweight division in general, there’s a feeling that it’s Bellator’s title, not the UFC’s, that matters. Given that the UFC lacks more than a handful of fighters in the weight class. “I don’t think the UFC ever had an intention to start a 145lb weight class. I think they wanted to be in the Cyborg business,” Coker posited. “And that’s what it was. Because to build a division around it takes time and effort. You’ve got to go out and sign the people, you’ve got to nurture the fights. That was really one of the things that happened, was — they wanted to tie her up, they tied her up.”

“Now she’s free, now she’s here, we have a lot of girls she can fight,” he continued. “And it starts with Julia Budd, who by the way, looks like she’s in amazing shape. She’s going to come and bring it. I tell everybody, don’t underestimate her. This girl can throw down, and she’s dangerous.”

Coker also confirmed Thursday that there will be more talks with RIZIN FF, although he has not spoken to Nobuyuki Sakakibara, RIZIN’s President, since the two promotion’s joint shows at the end of 2019.

Watch the full Bellator 238 press scrum with Scott Coker above! 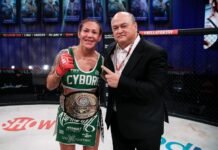