Floyd Mayweather is returning to the boxing ring in 2020, and UFC lightweight champion Khabib Nurmagomedov could be a legitimate candidate to fight “Money” inside the squared circle.

Initial reports suggest that Mayweather wants to do another cross-promotional fight with a mixed martial arts (MMA) star, given how successful his blockbuster 2017 boxing bout with Conor McGregor was. If a rematch with the Irishman isn’t on the books, Mayweather could very well take on Nurmagomedov. “Money” certainly seems interested, posting the following on his Instagram just days ago:

With that being said, the Nurmagomedov camp has now responded to the whispers of a fight with Mayweather. Khabib’s father, Abdulmanap, tells TASS that, after his son’s upcoming UFC 249 title defense against Tony Ferguson in April, the Nurmagomedov camp will begin negotiating to fight Mayweather. He also adds that his son will train for six months with unified boxing lightweight champion Vasyl Lomachenko to prepare for, arguably, boxing’s greatest of all time.

Abdulmanap did add one last, and very interesting, stipulation to a potential fight between Mayweather and his son. He’d like the fight to feature 11 rounds under boxing rules, and one round with MMA rules.

“Mayweather has statistics on fights of 50 wins and zero losses, he is the greatest in boxing and he wants to fight with the same champion who did not lose a single fight, with Khabib, everything is fine, but now we have Tony Ferguson on the line. We said a long time ago: let us finish with Tony, after that we will work with [the team of Ukrainian boxer Vasily] Lomachenko for six months, then there will be a boxing fight.

“We offer any day anywhere, with only one condition: 11 rounds in boxing and one in mixed martial arts (MMA). We will stand 11 rounds against the best boxer, so why not go one round according to the rules of MMA with us? But all things will happen after Tony.”

Mayweather did tease fighting Conor McGregor, in the build-up to their 2017 boxing bout, under an MMA ruleset. However, nothing materialized from that, as it was ultimately just trash-talk leading into the bout. The likelihood that Mayweather attempts to compete in MMA with one of the most vicious grapplers of all time is very slim. Any fight between the two parties would likely take place under traditional boxing rules. 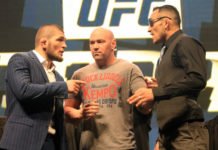 Khabib Nurmagomedov vs. Tony Ferguson Planned for Brooklyn in April