Michael Chandler was too much for the rising Sidney Outlaw, knocking him out in the first round of the Bellator 237 co-main event.

Michael Chandler was originally set to face former UFC champion Benson Henderson at Bellator 237, but the latter pulled out and in stepped Sidney Outlaw.

Michael Chandler has held the title three separate occasions since joining Bellator in 2010. Overall, he is 17-5 in the promotion with wins over Benson Henderson, Eddie Alvarez, and Patricky Pitbull. He was not able to defend his title in his most recent reign. Chandler won back his title from Brent Primus last December, but fell to double-champion Patricio Pitbull in his first defense. He has not fought since the loss in May.

Sidney Outlaw first fought in Bellator in 2014, but went elsewhere until this year. One of those stops included the Contender Series in 2017, where he won, but did not get a contract. Outlaw’s return to the promotion came just last month when he defeated longtime veteran Roger Huerta.

Jabs were exchanged out of the gate, then Chandler closed the distance with heavy blows to the body. They returned to the center of the cage, where Chandler continued to land to the body. Outlaw shot for a takedown, but Chandler brushed it off with ease. Chandler continued to push forward with shots, not letting Outlaw get comfortable. He then threw a right hand over the top that landed on the button, knocking Outlaw out cold. It was a great bounceback win for the former champion.

Main event up next! pic.twitter.com/MTm5yJbgIs 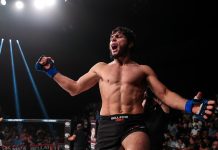