Ciryl Gane’s power was too much for Canada’s Tanner Boser to contend with, as the pair went the distance in the featured preliminary fight at UFC Busan.

Tanner Boser and Ciryl Gane served as the featured preliminary fight at UFC Busan. Boser vs. Gane was an interesting heavyweight match-up: Boser was one of Canada’s most successful big men of late, while Gane, representing France, had actually won a TKO title earlier in his career.

Gane was a heavy favorite heaing into the fight. But Boser, noticably smaller, held his own early, changing stances and throwing more. He’d catch a kick, but come up short on the left hook he fired off over top of it. Boser slipped off a leg kick while taking a punch to the body, but was up immediately. Later in the frame, Boser would find some success with his overhand right. Gane would fan on an uppercut, and another overhand right from Boser would follow. It was power vs. technique early, as Gane was taking big swings, but Boser was putting more combinations together.

The second round saw Boser immediately move in with a combination. Gane would try to chance levels on Boser’s next attack, but Boser was able to fend the takedown attempt off. He was showing some damage by the right eye, a trickle of blood. Gane would target that moments later, landing a left. Gane landed a kick to the upper thigh, and his punches upstairs were beginning to take a toll, single strikes or not. Boser would land a leg kick, while Gane would go to the boy. Gane tried a stance switch of his own. Moments later he’d move in and land clean on Boser. Gane would move in, looking for the kill, but Boser was able to escappe. Another inside leg kick landed for Boser. He’d land a left to the body, but eat a knee in a clinch shortly after. A counter by Gane connected in the final minute, and he was slowly pulling ahead.

Between rounds, Boser’s corner told him he needed the round. He came out on the attack, throwing a combination. Gane was still sitting down on his strikes, throwing for power. Boser would catch a kick, but was unable to take advantage of it. A knee landed for Gane, and Boser appeared a bit worse for the wear. Still, he pressed on. It became increasingly apparent, however, that the Canadian needed a stoppage to secure the victory at UFC Busan. And that simply wasn’t in the cars. Instead, Gane let his hands go in the final two minutes. Still power shots, but more of them. Gane threw a couple more knees, including a jump knee with a minute left. Boser was under fire, eating strikes to the body and head, while staying mobile enough to avoid coming close to being stopped. He survived to the final bell, but Gane took home the decision win. 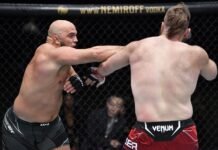