Ahead of Bellator 234, Roger Huerta still has his eye on the title — the last thing he’s after in the fight game.

Roger Huerta locks horns with Sidney Outlaw at Bellator 234 this week. The event emanates from Menora Mivtachim Arena in Tel Aviv, Israel, and is set to go down Thursday, November 14 at 4:00PM EST (Paramount Network will air the card the following night). Huerta vs Outlaw is the co-main event for the card. This is an intriguing crossroads fight at lightweight, between an established veteran and a surging pugilist looking to score a statement win.

In preparation for this fight, Roger Huerta has been putting in work with some familiar gyms. Ahead of the fight, he told us that he was working with “Guys over at Tiger Muay Thai and Phuket Thailand… I was able to get some good work in.” Huerta has big aspirations within Bellator’s 155lb class if he gets the ideal outcome at Bellator 234. “I’m after that world title. That’s the last thing I’m going for in this fight game,” he stated.

Huerta has checked out some footage on Sidney Outlaw prior to this fight. He is familiarizing himself with Outlaw’s skillset, but isn’t resting on this idea that Outlaw will be the same fighter on Thursday night as he has been in past fights.

“I went ahead and when I signed the bout agreement to fight him, I looked him up. Saw a few of his fights and kind of understood what he does mostly,” he said. “You know everybody changes their camps and so on. He could be a different fighter from what I’ve seen… I saw he was training with Jorge Masvidal so he should be ready to go.”

Despite the aforementioned title aspirations, Huerta is by no means overlooking his next opponent. Huerta stated, “He’s tough. Seems heavy. Good grappler. Seems like once he takes you down, he’s good on the ground. From what I’ve seen doesn’t look like a heavy puncher. Again I’m not going to say I’m not going to be concerned or not looking out for that. I feel I’m pretty damn good everywhere as well. It’s going to be a good fight.”

Roger Huerta is very much focused on the present and what’s immediately ahead of him. There was a headline going around saying Huerta was seeking first Bellator win since 2010. Huerta’s thoughts on that are simply that “I’m not the same person I was yesterday or the day before. I’m a completely different person and a completely different fighter.”

Roger Huerta is someone who has fought for UFC, ONE Championship, and now Bellator MMA. As a fighter, he has been all over the place and sees the present landscape of mixed martial arts as being a fruitful one. “I think right now the fight game has grown quite a bit and it’s good for all fighters,” he finished. 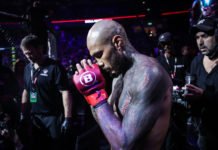