In a rematch from 2015 outside the UFC, Pannie Kianzad showed superior striking en route to a unanimous decision win over Jessica-Rose Clark at UFC Moscow.

Pannie Kianzad and Jessica-Rose Clark met for the second time at UFC Moscow on Saturday. Kianzad had won the pair’s original meeting back in Invicta FC in 2015, but it was Clark who made her way to the UFC first.

Clark, affectionately known as Jessy-Jess, was making her return to bantamweight, foregoing the dangerous cut to 125lbs. Both fighters were coming off losses and looking to get back on track.

The pair started with a clinch in their rematch, knees traded by the fence. Back in the open, Clark was finding some success with her right hand, while Kianzad fired leg kicks and her jab, opening up an opportunity to land her left. Relatively close early, both women landed throughout the round. However for the most part, it was single strikes, and as the round wore on, Kianzad’s jab was giving her an edge. She also appeared to have the power advantage.

Kianzad continued to work her jab in the second round. That allowed her to set up combinations, and soon she had Clark on the defensive. Clark’s kicks, her best attack, were being countered with punches over the top. Clark would fire a spinning back elbow, but while pretty, it didn’t have the desired effect. Kianzad, meanwhile, was in the driver’s seat, but an elbow by Clark stood her up briefly. Kianzad was showing some damage by the end of the round, but Clark would need a lot more of that.

She’d try to build on that by opening the third round with the same attack. But soon enough Kianzad had tied Clark up by the cage. That didn’t last long, however, and the pair went back to trading. Kianzad was landing more, her form tighter. She was also able to move in and out successfully more often than not, causing Clark’s counters to fall short. Kianzad finished the round strong, leaving little question as to the winner. 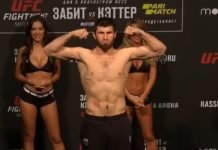 UFC Moscow Bonuses: Zawada Cashes In for Upset of Nurmagomedov