ONE Championships’s next Malaysian date will see the promotion put the spotlight on kickboxing, with the crowning of their inaugural bantamweight and strawweight champions in that discipline.

ONE Championship: Mark of Greatness takes place December 6, 2019 at the Axiata Arena in Kuala Lumpur, Malaysia. The card as announced can be found below. 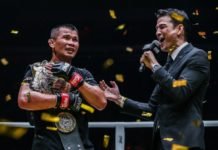