AXS TV will continue to be a home for MMA programming as it has been announced that they are the new English broadcast partner for Combate Americas.

AXS TV is back in the MMA business.  The company announced in a joint press conference on Wednesday that they had signed a deal with Combate Americas to be the new home for their English language broadcasts.  The news comes weeks after the announcement that the promotion had signed an extension with Univision as their Spanish language broadcast partner.

Combate Americas CEO Campbell McLaren said that the deal will go into effect on December 6 with a special preview of the pay-per-view event featuring Tito Ortiz and Alberto Del Rio the following night.  He also expressed that the current plan was to air 35 events in 2020 which would be simulcast between both networks.

The promotion had been with streaming service DAZN for roughly a year before parting ways in September.  The company had signed a deal in 2018 with the streaming service and joined Bellator as part of the lineup of combat sports content in DAZN’s debut year in the United States.  McLaren did say that Combate Americas would air one more event on DAZN: the annual Copa Combate one-night tournament.

After the sale of AXS TV to Anthem Sports and Entertainment, the network made multiple changes to their programming including the discontinuation of their deal with Legacy Fighting Alliance, better known as LFA, in late September.  The two sides had a long-running partnership with LFA flourishing as a type of feeder system to the UFC and AXS becoming known for airing MMA programming over the years with shows such as Inside MMA.  It was announced over the weekend that LFA had signed a new broadcast deal to air on UFC Fight Pass.

The upcoming event, Tito vs Alberto, will air on pay-per-view on December 7 and crown an inaugural women’s strawweight champion as Melissa Martinez takes on Desiree Yanez in the night’s co-feature. 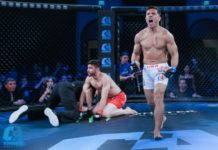 Combate Americas Waives Matching Rights for Lopez, UFC Fight With Dvalishvili Is On