Featherweight Shane Burgos earned a statement win against Makwan Amirkhani at UFC 244, and now looks to negotiate a new deal with the UFC.

New York, NY — After suffering the first defeat of his career in 2018, Shane Burgos has once again gone on a tear. Defeating Kurt Holobaugh, Cub Swanson, and now, Makwan Amirkhani at UFC 244, Burgos (13–1) is tearing up the featherweight division.

A third round TKO sealed the deal against Amirkhani, underscoring the danger Burgos poses against any opponent. Speaking to reporters including Cageside Press following the fight, Burgos said that he was “excited about that win. I like that it wasn’t just an easy fight, I faced some adversity. He cut me with the first shot, right off the bat. I was like ‘aw are you kidding me?!’ Then he got me down right away.”

Soon enough, however, Burgos felt he had an edge. “I knew as soon as I got up after that little scramble we had, I was like ‘I’ve got energy for three rounds, and you look like you’re tired right now, so I’m going to push the pace in this one.'”

Burgos was not expecting his opponent to utilize his wrestling so early. “That’s why he got me down. I expected him to throw a little more, maybe throw a flying knee right off the bat, but yeah it caught me off guard, not going to lie.”

Implementing a whizzer, Burgos’ confidence in defending the takedown continued to grow. Not all that different from how his confidence overall has grown. He went into the Burgos bout on the last fight of his UFC deal, so it was important to make a statement. “I wanted to put a stamp on it with this one.”

UFC on ESPN 11 Bonuses: Zero Surprise on Fight of the Night 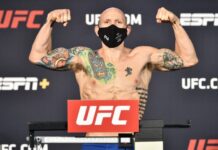 Current, Former Champs and More Pros React to Burgos vs. Emmett at UFC on ESPN 11 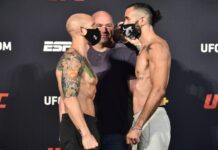