Strawweight gold was on the line in the main event of Invicta FC 38, when Kanako Murata took on Emily Ducote. The latest offering from Shannon Knapp’s all-female fighting outfit had originally stacked the deck with two title fights. But flyweight challenger Karina Rodriguez came in heavy at Thursday’s weigh-in, depriving fans of a championship fight that had originally been scheduled as the main event.

With the Rodriguez miss, Vanessa Porto lost out on what would have been her first title defense. Instead, Porto met Rodriguez in a three-round contest, while the previously scheduled co-main event, featuring Kanako Murata taking on Emily Ducote for the vacant strawweight championship, served as the evening’s new headliner.

Check back from fight time (8PM ET) for full results and a recap of all the action!

Kanako Murata started out the first round by pressuring Ducote, however, it was Ducote that was actually throwing strikes, snapping back Murata’s head with a right straight. Murata would quickly get the takedown, however, and Ducote would throw up an armbar attempt but it wouldn’t be enough. Murata would then have success for the rest of the round on top, with dominating top pressure and some nice elbows.

Round two was an interesting one, Ducote continued with her stand up success, and began really finding the range in the second frame. She started chewing up Murata’s leg, and Murata’s takedown attempts were foiled by Ducote until the final 90 seconds of the round. However Murata would get the takedown, but due to an armbar attempt by Ducote, she was unable to mount much offense.

Round three saw more success for Ducote on the feet. Murata landed a good combination early, but that was about it. Ducote stuffed two takedowns throughout the duration of the round, and it seemed like the tide was turning in the Oklahoman’s favor. However, in the final minute, Murata would get the takedown and would end the round on top.

The fourth round was more standing success by Ducote, however it was the final moments that would define the round. Murata would get the takedown with a minute to go, and Ducote would go for an armbar as Murata looked to be resting. The armbar looked deep but Murata would roll out of it, go back to her feet, then try to cartwheel her way into Ducote’s guard. Ducote would then get back to her feet, and takedown Murata, and get her back. All before time expired heading into the fifth round.

The fifth round was another very close round, where Ducote had success on the feet, especially early. She appeared to rock Murata as she caused the latter to start bleeding. As she was going for the kill, Murata got a takedown and proved she couldn’t be submitted as she got out of another armbar. In the end, they would go to a decision, in one of the most entertaining Invicta fights all year.

After the three-round fight, it was hard to not be sad that we didn’t see more. Vanessa Porto began the fight by taking Rodriguez to suplex city, throwing the challenger around the cage. Getting takedowns at will, but Rodriguez was not stirred. Round two saw Rodriguez battle back, and stuff all of Porto’s takedowns, and tune her up on the feet, leading to a decisive third round. The third round saw success for both women, with Porto landing takedowns, while Rodriguez still did her best work at range, landing plenty of volume.

An amazing fight, and with a win by Porto, we avoid any title controversy.

Mallory Martin made her return to Invicta FC in style after a victory on Dana White’s Contender Series. Making a name for herself there but not getting the contract, she returned to Invicta to take on newcomer Cynthia Arceo, and put a beating on the newcomer. Martin was getting outstruck on the feet for the entirety of the 15-minute contest, but Martin continually got takedowns and dominated on the ground anytime it landed there. What a win by Martin.

Maiju Suotama started off the fight red hot, getting the takedown and the back almost instantly, it looked like the fight would be over quickly. Instead, Young would survive, and make it to round two after having Suotama on her back the whole round. Young would then drop Suotama en route to a dominating round two, where she bloodied up with Finland fighter. Round three was much like the second, as Young dominated Suotama, on the feet, and on the ground. Nearly getting the finish from mount in the final seconds. A great comeback by Young.

Lisa Verzosa and Kerri Kenneson came to scrap. Kenneson opened with an impressive first-round where she dropped Verzosa with a short punch, and nearly got the finish. However, Verzosa would survive and would have a good second round where she put in some work on the feet of her own. Landing brutal body shots, she worked her way into the third round. Those famed body shots would show up in the third round, where she would rock Kenneson, and likely secure her the victory.

Auttumn Norton put on as dominating performance as you’ll ever see. The day after Halloween, she made Rincon look like a horror film victim. Round one had loads of brawling, with Norton landing right hooks at will that would make Wanderlei Silva blush. The second and third rounds were fantastic ground displays by Norton, where she bloodied up Rincon. By the end of the fight, Shaianna Rincon had massive swelling on her right eye, in addition to the blood, while Norton had no scratches on her. Fantastic win.

Taneisha Tennant and Serena DeJesus was a much better fight than it had a right to be. With a combined two fights between them, they put on an absolute scrap. From the opening bell, they were throwing full power shots. Tennant rocked DeJesus very early with a right hand, but DeJesus recovered to make it a fight. In round two, DeJesus rocked Tennant with an impressive kick to left-hand combination. Tennant would recover and make it to round three, where she would have great success following a punch that opened DeJesus up. From there on, it was Tennant that won the round with nice volume, and ultimately secured the victory. 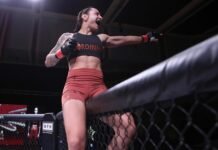