AEW’s Jake Hager, formerly Jack Swagger of WWE fame, returned to the Bellator cage on Friday. At Bellator 231, Hager was set to fight his third bout of 2019, and third overall as a pro, against Anthony Garrett. At 4-2 heading into the fight, Garrett was a small step up for Hager, who was a green fighter despite being a decorated amateur wrestling in college.

The one and only @RealJakeHager is here and looks ready to do battle on his way to the Bellator cage.

Watch #Bellator231 LIVE on @ParamountNet and simulcast on @DAZN_USA! pic.twitter.com/KhRxOVe3Vq

Hager had promised fans would see a little bit more of his stand-up game against Garrett. And while he threw a punch or two, it was less than thirty seconds before he closed the distance and started looking for a takedown. Garrett then signaled a low blow, but the ref called it a knee to the thigh, and ordered the pair to carry on. Back in the open, Hager would land a jab, then clinch again, but a knee did land low this time around.

Garrett, bloodied, took a moment to recover, before the pair got back underway. Garrett would eat another jab then try for a takedown of his own. That failed, and Hager again connected with a knee low. Garrett went crashing face down in pain. This time, the doctor came in, not that there was much he could do. Garrett was unable to continue, and the fight was ruled a No Contest while he was still prone on the ground.

Afterward, Hager could be overheard complaining that he didn’t want to wait in the cage for the result to be announced. “Can I go to the back? What am I standing here for?” he questioned prior to the result being read. Green fighter or not, hopefully Hager learns from this one.

Official Result: Jake Hager. vs. Anthony Garrett ends in a No Contest (groin strikes), Round 1, 1:56 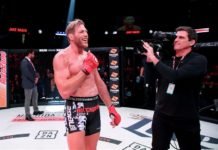