With former Bellator and ONE welterweight champ Ben Askren returning at UFC Singapore, MMA fans can once again spark up the debate over whether the UFC is truly where the best fighters are found.

For most of its history, Mixed Martial Arts as a sport has been recognized in mainstream culture by one brand: the UFC. The power commanded by this promotion was so great that it gave birth to people saying things like “do you train UFC?” However, for the past few years, as the sport gained popularity, fans in the mainstream have started exploring the sport beyond the promotion, and this has brought in several organizations into the spotlight.

Starting from KSW in Europe to Brave in the middle-east to ONE and RIZIN in Asia, several promotions have popped up and have created their own dedicated audiences. Fighters today have the option of gaining fame in the MMA community without strictly relying on UFC. Promotions like Bellator MMA have also seen a significant growth by securing TV deals in large markets like the U.K., India and elsewhere.

While it would clearly be hyperbole to say that one of these promotions can challenge the UFC in terms of scale and audience, one effect of the sport’s expanding audience is the rise of star fighters in other promotions. Fighters like Ilima-Lei Macfarlane (Bellator) and Angela Lee (ONE Championship) are ranked as high in some independent mainstream MMA rankings as the UFC’s own fighters. Their popularity has increased to a global level in some cases, thanks to the backing of their respective promotions. Thus raising the question, how would these fighters fare in the UFC? And could a champion from ONE or KSW or Bellator actually challenge a UFC champion? These questions today are limited to very small hardcore pockets and are most often not raised in the mainstream yet, but for how long?

When the UFC signed former Bellator and ONE champion, Ben Askren it was time to put the theory of “fighters from other promotion being as good as UFC champions” to test. Eddie Alvarez had been a forerunner in the debate, but Askren was one of the most popular MMA fighters to have not competed in the UFC. He was regarded as an elite wrestler with the capability of beating even the best UFC fighters. His reign in Bellator saw him beating the likes of Douglas Lima and Andrey Koreshkov. Askren would secure a record-setting four title defenses before he moved to Asia with ONE, where he took out opponents with ease.

If Askren does manage to become a legit contender with multiple wins in the UFC, it adds a lot of weight to the argument that the UFC has lost its stranglehold on the best fighters in the world. However, if he doesn’t win it strongly reinforces the idea that UFC still is the home to the best, and that only the best make it big there.

So far, at least by the looks of it, fans haven’t given their verdict on Askren just yet. He may have won his first fight against former champion Robbie Lawler, but the victory was very controversial and most thought that prior to the possibly premature ending Lawler was winning. The second fight was simply way too short. The fight more of became a compliment to Jorge Masvidal’s abilities than a comment on Askren’s career.

Now, Askren is scheduled to face one of the best grapplers to enter the Octagon, Demian Maia. The pair headline UFC Singapore this weekend.

Maia is a UFC stalwart with a very stacked resume. He has had two shots at the UFC gold, one at middleweight against the great Anderson Silva, the other against Tyrone Woodley at welterweight. This pairing might become the performance on which Askren is evaluated on in the end. Though the fight is taking place in Asia and the card is a minor one, the names involved in the main event are huge.

Whether or not one fight really answers the questions we have about Askren, or one fighter answers the question of whether UFC fighters are truly the best, is open to debate. Nevertheless it should be fun to see what fans make of Askren after the fight, and whether it changes the way they look at non-UFC champions. 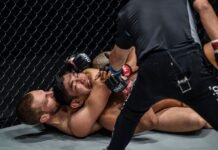