Saad Awad is stepping up short notice against the always dangerous Paul Daley in the co-main event of Bellator 232 this weekend.

No one can ever say Saad Awad isn’t a gamer. On less than a week’s notice, Awad, who normally fights at lightweight, will step in against Paul Daley at Bellator 232 this Saturday. That move comes as Daley’s original opponent, Sabah Homasi, was forced off the card due to injury.

Sabah Homasi has been forced to withdraw from his fight this Saturday due to injury.

Daley vs. Awad will be contested at a 175lb catchweight, Coker revealed. The fight is the evening’s co-main event.

Daley (41–17–2) bounced back from a loss to nemesis Michael Page in the opening round of the welterweight grand prix to defeat Erick Silva at Bellator 223 in June. After joining the Bellator MMA roster full time in 2015, ‘Semtex’ has gone 6-4 in the promotion, including notable wins over Silva and Lorenz Larkin. Daley’s losses, meanwhile, have come to a who’s who of Bellator’s 170lb’ers: Page, Douglas Lima, Jon Fitch, and current champ Rory MacDonald.

Awad (23–12), a Bellator mainstay, last fought at welterweight in 2016, in a losing effort against Brennan Ward. He would then return to lightweight (after a catchweight bout at 165lbs), winning four straight, before embarking on a three-fight losing streak, the last fight of which came just weeks ago at Bellator 229. 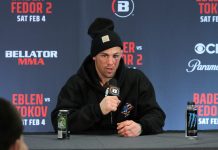 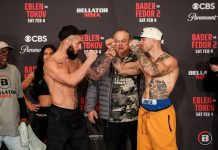 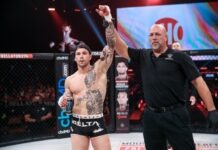