After being snubbed of a UFC deal, Brendan Loughnane made a successful PFL debut on Friday night in Las Vegas.

Much was made of featherweight Brendan Loughnane not receiving a UFC deal following his appearance on Dana White’s Contender Series earlier this year. But at PFL 7 2019, Loughnane had a second chance to make a big impression on ESPN+.

Loughnane opened with a low kick and opponent Matt Wagy circled away. Wagy got the clinch against the cage but Loughnane  spun out and fired off a head kick. Wagy answered back with side kick of how own. Loughnane pressed the action and backed up Wagy with a leg kick. Wagy came forward with a 1-2 combination that missed the mark and Loughnane  landed another leg kick. Wagy again moved forward with a right, high kick combination that missed the target. Loughnane landed another leg kick and Wagy again fell back. Loughnane  came with a spin kick that Wagy slid out of range of.

Thus far, Loughnane was in the driver’s seat. Wagy continued to circle from the outside and Loughnane held his ground then pressed forward, landing a hard body kick, followed by a spinning back kick that landed. Wagy circled out to take the middle of the cage and the two exchanged again. Wagy now looked to press the action and land his own leg kicks just before the round came to a close.

A touch of gloves and they were off in the second round. Loughnane opened with a leg kick and Wagy circled to find his range. But Loughnane slipped out of harm’s way as Wagy moved forward and just missed with an overhead shot. Loughnane went back to the leg kick and followed it up with a body kick. Wagy looked to mix it up with a leg kick-left hand combination. Loughnane landed another leg kick but Wagy kept moving forward with a big left that Loughnane dropped under. He took the body of Wagy, pushing him into the cage. The two worked briefly in the clinch before they broke and returned to the center of the cage. Wagy looked to lock in the body clinch but Loughnane spun it around and pressed him into the fence, from there Loughnane looked to land a pair of knees before Wagy broke free. Back in the middle of the cage Wagy again looked to press the action and again Loughnane spun a clinch attempt around and pressed Wagy into the cage. The two landed some substantial blows on the break and Wagy moved forward with a punching combination to close out the round.

Loughnane came out quickly in the third, but Wagy fired off a big right that forced him back. Loughnane shot the single and got Wagy to the mat for a moment before they sprung back to their feet and went right into the clinch, where Wagy dropped down for the takedown. Loughnane defended well until Wagy had to give up on the attempt. Loughnane now controlled center and landed a nice combination before taking the back of Wagy and slamming him to the mat, where he quickly took top position and worked from the guard. Loughnane gave up on the position and stood back from Wagy’s guard. Loughnane  opened Wagy’s defense up with a leg kick followed by a right that looked to have hurt Wagy for a moment. Loughnane continued to push the action with a leg kick followed shortly by a left-right combination that found it’s target. Wagy continued to keep his back to the cage and Loughnane  made him pay for it with a hard hitting knee followed by another punching combination, but Wagy fired back in the last seconds of the round, both men now bloodied from the action. 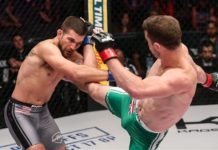