Moving from his native Argentina to the U.S. to train with Black House MMA, Santiago Viton will have his first fight on American soil Saturday night.

Los Angeles, CA — Black Houe MMA fighter Santiago Viton will have his first fight on U.S. soil when he steps in the cage at SparStar MMA’s SSP Fight Night 45 tonight in Commerce, CA.

Cageside Press caught up with the Argentinian fighter a few weeks ago at Black House, where he discussed training with the renowned camp, and coming to America.

Having the support of his new team heading into his fight against Quintel Brooks is “very good. It’s feeling unique. I want to be here, I want to fight, it’s very good to have the support. Not only from here, but from family and friends from Argentina too.”

While he misses Argentinian BBQ, Viton hasn’t found American food all that bad. Still, weight was not expected to be an issue. “Since I am here, I’m always on diet. I can do the weigh-in good, the fight is going to be what it always is. Go there, fight, and try to be the best,” he said.

The end goal? “I want to be here in the US, fighting for a big promotion. LFA, UFC. UFC is the dream of all fights, you know? Be the champion.”

Watch our full interview with amateur bantamweight Santiago Viton above! 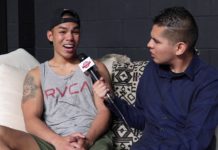