With the event a go, check out highlights from Thursday’s weigh-in for Invicta FC 37: Gonzalez vs. Sanchez.

Invicta FC 37 goes down Friday night, and ahead of the all-female promotion’s latest offering, all fighters hit the scales in Kansas City, Kansas. The card was originally expected to feature an atomweight title fight between champ Jinh Yu Frey and Ashley Cummins. However, an injury to the champion has seen that fight pushed back to later this year.

There was but one mishap at the scales Thursday. Nicolle Caliari, fighting Invicta mainstay Kay Hansen, missed the strawweight limit. Just missed it. She came in at 0.2lbs over the 116lb non-title fight limit. As a result, she’ll give up 25% of her fight purse.

Ouch. All other fighters made weight for the event, which will air exclusively on UFC Fight Pass. Check below for video and photo highlights courtesy of Invicta FC! 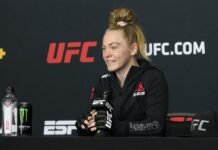 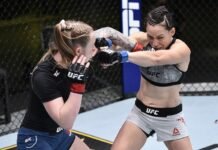