Giga Chikadze made a good impression in his UFC debut, however, Brandon Davis’s best efforts made their fight at UFC Copenhagen a draw. Until the judge’s scorecards were reviewed.

Stepping up on short notice at UFC Copenhagen on Saturday was featherweight Brandon Davis. Davis, as game a fighter as any, had the unenviable task of welcoming standout GLORY kickboxer Giga Chikadze to the promotion. Chikadze had begun his MMA journey in 2015, compiling a 7-3 record prior to being signed by the UFC.

Giga opened up with a clean left hand, before looking for a head kick. Davis then quickly looked for a takedown, which Giga responded to by grabbing the fence. Davis didn’t care, slamming him down anyways, and moving to half-guard up against the cage. Giga ended up reversing the position and went into full-guard. He landed some big shots to the body and some powerful shots upstairs. However, Davis slipped out from the bottom and soon get a takedown to end the round again.

Giga opened round two by landing a clean right hand and landing some good shots. Davis responded with a nice right hand of his own, but Giga continued moving forward and landing combinations. Giga landed a big left and right, that landed clean but didn’t stun Davis. Davis kept moving forward trying to close the distance, and eventually got the takedown near the end of the round. However, Giga got back to the feet by the end of the frame.

Giga in the third round was very mobile, staying on his bike not allowing Davis to get a hold of him. Davis tried to put on the pressure but Giga slipped most of Davis’s big shots, while he stuffed most of his takedown attempts. Davis would get a takedown in the final ten seconds but that was about all of his success in the third. Overall, a fun fight from both.

Update, 1:25PM – The UFC announces Chikadze in fact won the fight, upon review of the scorecards. 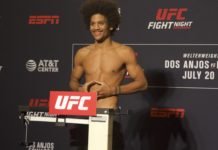 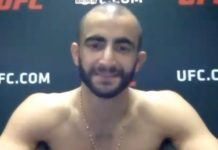 UFC on ESPN 8: Giga Chikadze Had a Feeling Mike Davis Would Drop Out of Fight a Third Time