Jose Quiñónez and Carlos Huachin would finish up the prelims for UFC Mexico City, and Quiñónez ended up on top after a dominant performance.

José Alberto Quiñónez headed into his home country at UFC Mexico City having won four of his last five bouts. Wins over Teruto Ishihara and Diego Rivas highlighted the Mexican’s win streak over three years. However, Quiñónez lost his last time out, a submission loss to Nathaniel Wood in February.

Quiñónez’s opponent is the 23-year-old Carlos Huachin. Huachin made his debut earlier this year at UFC 237, losing via TKO to Raoni Barcelos. Prior to that, the Peru-based fighter was on a seven-fight unbeaten streak, dating back to 2016.

Quiñónez knocked Huachin down with the first right hand he threw, he swarmed with right hands. However, Huachin threw up a heel-hook and was able to fight out of the position. Huachin would then recover, and land a couple of big left hands. Hauchin struggled to get on the inside against his taller foe, as Quiñónez circled to his left and threw big leg kicks. Hauchin threw some good combinations in round one, however, Quiñónez clearly took round one with his kicks and knockdown.

Quiñónez did a great job of keeping Huachin at distance, continuing with his strategy from the first. His kicks were landing at 50%, while Huachin struggled to land anything of substance. Halfway through the round, Quiñónez dove on a takedown and ended up on top in guard. Huachin was eating a couple of shots on the ground, but did a good job getting back to his feet. Huachin responded to a lazy leg kick from Quiñónez by landing a left-hook, a popular strike for him. But it didn’t land clean, and not much did for Huachin through ten minutes.

Quiñónez opened the third round by quickly taking Hauchin down and ending up in full guard. Huachin then ate a good variety of right hands and elbows for the next few minutes, as he couldn’t get to his feet. However, he would shrug Quiñónez off with some time left, and he started to rush at him as time was ticking out. He ran right into a right hand that snapped his head back that temporarily had him back off. Huachin complained about an eye poke, however, the referee did not call time. Michael Bisping on the commentary would tell him to pay attention, as he remembers his fight with Anderson Silva.

Huachin then tried and get something in the past minute, but he wasn’t able to, and Quiñónez secured the big win. 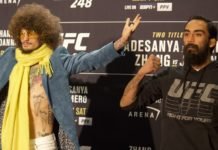 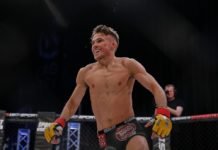 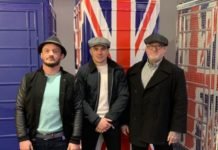