Getting better as the fight wore on, Irene Aldana put on one of the best performances of her career against Vanessa Melo at UFC Mexico City.

Irene Aldana was set to welcome UFC newcomer Vanessa Melo Saturday at UFC Mexico City. The scheduled bantamweight scrap was thrown for a loop when Melo missed weight, however, and instead would proceed at a catchweight, with Melo giving up 30% of her purse.

Aldana was entering the fight off a loss to Raquel Pennington that snapped a three-fight win streak in the promotion. Melo, meanwhile, was heading in on a five fight win streak, but had the disadvantage of being a short-notice replacement.

Melo fired a leg kick early, and the pair traded, Aldana backing out of range. Aldana landed a hard leg kick of her own. When Melo could close the distance, she was finding some success with her heavy hands. However more often than not, Aldana was able to fire off a right hand, or combo, and fade back. Her jab got going as well. The pair battled it out to the bell, with Aldana firing a jump knee at the buzzer.

Melo let her hands go early in the second, pressing forward and connecting with a number of punches. However Aldana once again got on her horse and outworked her opponent. Aldana landed a jab to the body, then a right hand. She’d later plant a spinning back kick to the body. Melo made a half-hearted single leg attempt, and ate a few punches for her efforts. Melo, to her credit, never stopped pressing forward, but she was unable, through the first two rounds, to get the upper hand against Irene Aldana, whose boxing was simply a step above.

Irene Aldana became more creative and more confident as the fight wore on, and she opened the third with a high kick and spinning back fist attempt. A knee off the break followed a clinch. The skill differential was becoming apparent, but Melo charged forward regardless. A power punch was likely the Brazilian’s only hope of victory, but Aldana continued to pick Melo apart instead. She turned it up in the final minute, looking to land a knockout punch, but Melo proved too tough. On the scorecards, though, there was never any question. 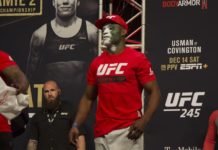 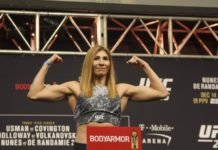 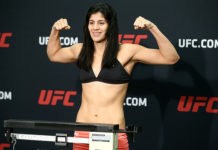