Bellator 231 will see former WWE star Jack Swagger return, against a small step up in competition in Anthony Garrett.

Jack Swagger, or Jake Hager, went through something of a heel turn in his last fight. But despite the crowd booing the WWE star following his finish of T.J. Jones, Bellator isn’t about to slow his roll. They’ve lined up Swagger’s third opponent, for the upcoming Bellator 231 card.

Swagger (2-0) will face Anthony Garrett on the main card of Bellator 231. The news was first reported by ESPN. Garrett (4-2) has competed exclusively for Shamrock FC since turning pro in 2016. He’s 1-1 so far this year, and is coming off a loss to Jordan Mitchell back in June at Shamrock FC 319.

At the very least, Garrett, who also competed for several years an an amateur, offers a small step up for Swagger. A collegiate wrestler, Swagger/Hager was an NCAA Division I All-American, and set the record for number of pins in a single season at the University of Oklahoma in 2006.

After making it to the top of the pro wrestling world, the former WWE star signed with Bellator MMA in late 2017, and made his debut this past January. To date, he hasn’t really been tested in the cage, but as expected, his wrestling has looked solid. Both his wins have ended in finishes via arm-triangle choke. 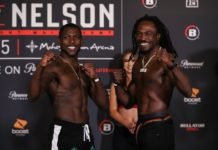