The UFC is heading to Mexico City on September 21 at the Arena Ciudad de Mexico. The card is headlined by Jeremy Stephens and Mexico’s own Yair Rodriguez. In a flyweight bout Sergio Pettis was set to take on Alex Perez, but Perez pulled out due to injury. Now out of left field, the UFC has signed veteran Tyson Nam to step in and fight Pettis.

How will Nam fare in the UFC:

Nam may not be a prospect considering how long he’s been around, the promotions he’s fought for, and the fighters he’s fought. Crazy enough though he’s never fought for the UFC until now. With many setbacks in his career, Nam has looked exceptional in the last five years only losing one fight, which was a close one.

Nam will at times wrestle to mix it up but tends more to stay on the feet where he is at his best. At times, Nam can be somewhat stiff but as the fight goes on he gets loose and becomes very dangerous. He has a lot of power in his hands and will do a lot touching at first with the jabs, then fire something thunderous. He does a solid job as well as mixing in kicks and attacks the body often. When it comes to defense he has solid takedown defense and he does do a good job counter striking as well. Where he will lack could wind up being his speed, especially in the flyweight division. He could end up losing on the scorecards just by not doing enough. Overall prediction: Will go 3-2 in the first five UFC fights.

How Nam matches up with Pettis:

Pettis has been in the UFC for seven years and is 8-5 for the promotion. Nam actually has more experience in terms of fights, but Pettis has more UFC experience and that’s important. The only path to victory for Nam is if he knocks out Pettis. Pettis was knocked out in the past to a lesser opponent in Ryan Benoit but since then his striking defense has improved. Nam is the bigger fighter but output and speed from Pettis may just be too much. If Pettis just fights smart landing quick and moving in and out he should win. It only takes one flush strike from Nam though. 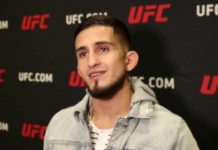 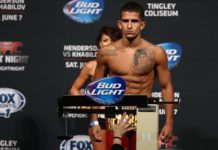