Griffin was looking to earn his first career Octagon victory at UFC Vancouver, after losing his promotional debut against Dan Ige in December of last year. The 29-year-old earned his shot after going 2-0 in LFA and securing a first-round submission victory on the Dana White Contender Series in 2018.

Skelly has been in the promotion for a while now and the 34-year-old Texan is 6-4 since his debut in 2014. Skelly has lost back-to-back bouts, and won two of his last five fights. His most recent bout came in November of last year, when he was submitted in the second round by Bobby Moffett.

Round 1: Skelly fired off a front kick to open and Griffin slipped away before he rushed in with a right that looked to have stunned Skelly for a moment. Griffin rushed forward but he tripped and Skelly got the takedown. Skelly got Griffin’s back and secured both hooks. Griffin tried to get up and made it to his knees for a moment but Skelly secured his arm and brought him back to the mat.

The two scrambled and and made it back to their feet and immediatly Griffin was on the attack. Skelly looked tired after he was not able to secure the choke but his did land a nice left, right before the round came to a end.

Round 2: Griffin opend with a pair of jabs, then Skelly shot in for the takedown but Griffin defended nicely. Griffin landed a 1-2 combination followed by a head kick that found its mark. Skelly fired back with the jab but Griffin continued to advance and worked his range.

Griffin continued to land on Skelly and forced him back into the cage. Griffin then went for the takedown and brought Skelly to the mat. Griffin worked to top position and dropped a pair of elbows from the mount. Skelly rolled and gave up his back, Griffin locked in the body triangle. Skelly stood back to his feet but Griffin held on, Skelly answered this by rolling forward and landed on Griffin, Skelly was now on top. Skelly moved quickly to Griffin’s back and looked for the choke again, with the body triangle locked in. Griffin moved back to his knees but Skelly held on and pulled Griffin back to the mat. Griffin again tried to get to his feet but Skelly held on, Griffin made it back to his feet with Skelly on his back as the horn sounded to end the round.

Round 3: Griffin looked to press the pace as he worked the jab and moved forward. Skelly landed a nice uppercut on Griffin as he came in but Griffin was unfazed and unloaded a combination and again ended with a head kick.

Skelly shot in for the single, but Griffin locked his arms around his head then worked from the bottom to reverse the position. Skully was quick to reverse the position and took Griffin’s back again. This time Griffin got to his feet and now it was Griffin’s turn to roll and land on Skelly but Skelly held on, locked in the body triangle and worked for the choke. Griffin defended the choke and looked to roll to his stomach, he made it to his knees but again Skelly held on and dragged him back to the mat. Skelly briefly secured the choke again but Griffin escaped then spun into Skelly and was now on top. Griffin broke away for a moment and as Skelly went to get up he secured his neck and looked for his own choke but the round came to an end before he could work for the finish. 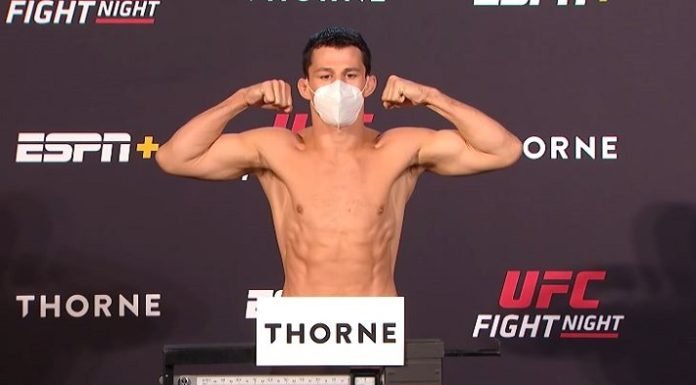