Believe it or not, Hunter Azure was more nervous to appear on Dana White’s Contender Series than he was to make his big-show debut at UFC Vancouver.

Vancouver, B.C. — Bantamweight Hunter Azure won his way into the UFC this summer on Dana White’s Contender Series. After picking up a win in his promotional debut at UFC Vancouver against Ultimate Fighter winner Brad Katona, Azure revealed that the Contender Series definitely prepared him pretty well for the big show.

In fact, he told Cageside Press and other media outlets following the bout, “it was a lot more nerve wracking for Contender Series. That was the job interview, I didn’t have the job yet.” In reality, the stakes were actually higher, you might say. “So that one I was a little more nervous. I had a lot more on my mind. Just a little more pressure. This time I had the job, and just had to come in here and prove what I could do.”

What he did was earn a unanimous decision against a local favorite, with more viewership, more people in the arena, than were present for his Contender Series outing. Improving to 8-0 in the process. Being under the spotlight didn’t seem to phase him, however. “I wrestled my whole life, I’ve been under bright lights. I’ve lost, I’ve come back. I love performing under the lights. It just makes me happy. I embrace it, I feel like that’s where I belong. It’s just an awesome experience for me. I love being here and showing people what I can do.”

As much as he loved being in Vancouver, international travel is not on the menu. In fact, Azure would rather stay closer to home next time.

“It’s fun to travel and go see other places,” he said, noting that Vancouver felt a lot like the U.S. “But I’d like to have my next fight in the states, so more people in my community and around [there] can come see.” 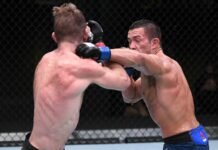 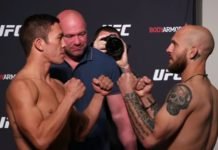