We asked five fighters competing at UFC Vancouver to pick a winner in Cerrone vs. Gaethje, and it wasn’t easy.

Ahead of UFC Vancouver on Saturday night, we asked five of the fighters on the card to pick the winner in the main event of Justin Gaethje and Donald Cerrone. We got some rather interesting answers, with many fighters having a soft spot for Cowboy Cerrone, clearly.

On thing became certain, however. Cerrone vs. Gaethje is not an easy fight to pick, even for the pros.

Jeff Hughes: “I don’t want to fanboy out here. Cowboy is still my favorite fighter as a fan. I’m happy to get to be on the same card as him. I promised myself I wouldn’t get too fanboy-ee or go out and try to take a picture with him, because I’m here for business and he’s here for business. But man, that’s going to be a great fight. Everyone’s calling it fight of the night already, but I’m going to laugh if it’s not, and it’s a more technical, slow-paced fight. It’d just be funny, because everyone expects it to be crazy. Which, it’s going to be crazy. But both those guys are pretty technical fighters. So who knows what’s going to happen.”

Cirkunov: “It’s a very, very interesting fight. I’ve been with Cerrone on the same card I think four times. We always chat, we always give each other kind of props. I don’t really know his opponent much, so I’m going to be cheering for Cowboy.”

Kyle Prepolec: “That’s, I don’t even know who to pick. I can see so many scenarios going both ways. I honestly can’t give an honest answer, it just really depends.”

Jimmy Crute: “Cerrone, if you ask me on any other day who my favorite fighter is, it’s Donald Cerrone. And I really like Gaethje too. I know everyone says ‘oh, Gaethje’s got the style to beat Cowboy.’ But if Cowboy kicks anyone in the head, they’re going to sleep.

In my heart I say Cowboy, just because I’m a massive fanboy, and Cowboy’s one of my favorites. So is Gaethje, I really like Gaethje’s style and his personality. But I think just because of watching him when I first got into the sport and stuff, I have to say Cowboy.

I’m just going with my heart, I can’t place an educated bet on that.”

Duffee would later add that there’d be no loser on Saturday, rather, the pair would just “put on a great, entertaining show.”

UFC Vancouver (UFC Fight Night 158) takes place Saturday, September 14 live at the Rogers Arena in Vancouver, B.C. The card airs on ESPN in the U.S., and TSN in Canada. 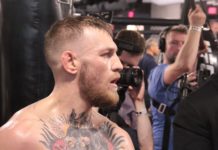 UFC: Conor McGregor Says Justin Gaethje is “On the List”