Cowboy Cerrone will have his usual rough cut, while a couple of other fighters are worth keeping an eye on at Friday’s UFC Vancouver weigh-in.

Mr. ‘Anytime Anyplace’ is back inside the octagon and headlining another main event against another top-ranked and extremely dangerous 155lb contender. Cowboy currently holds the all-time record for both wins and finishes inside the octagon, and he is the promotions go-to guy in the hectic 155lb and 170lb divisions.

Despite the mediocre record in the welterweight division, Cowboy was very close to his natural weight class and as a result, was able to perform better the next day. The trouble came when Cowboy ran into fighters of equal skill or better that were much bigger than he.

After an opportunity opened up for Cerrone to return to the lightweight division and be within a few wins of a title shot, he seized the opportunity immediately. He was able to defeat Alexander Hernadez and Al Iaquinta within the early part of 2019. But when faced with the streaking, super-hot Tony Ferguson, Cowboy was stopped in the second round due to a doctor stoppage for a gruesome nose/eye injury. This is a huge fight in which cowboy is sure to take a lot of damage, as well as have his cardiovascular abilit testedy. A bad weight cut could easily spell a very rough outing for Donald in Vancouver against a high output fighter like Justin Gathje over five rounds.

The fighter they call, ‘Demolidor’ stands at 6’1″ and posses a 73″ reach. He has a very large frame and has taken some fights at 185lbs outside of the UFC.  Watch Michel Pereira fight, you won’t be disappointed! This is a guy that brings high energy to the cage and having an exceptionally well planned out weight cut has to be mandatory because the amount of energy that he expends in such a short amount of time is truly mind-boggling.

Tristan Connelly will be making his UFC debut at UFC Vancouver. Tristan will also be making his first appearance in the 170lb weight class. Connelly has fought the majority of his fights in other promotions at lightweight, but he has missed weight at this weight class before. This is one of the rare cases that you see a fighter get the call to move up to the UFC and instead of dropping a weight class or even staying at the one that got him to the dance in the first place, Connelly instead elected to go up a weight class. At 33 years old it is very possible that Connelly just knows his body and knows the weight where he feels comfortable at as he has had a couple of catchweight bouts at around 160lbs as well. 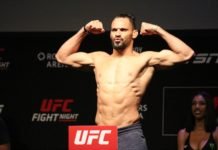