Dawn of Valor will see Zebaztian Kadestam defend his title, while John Lineker debuts as ONE Championship returns to Indonesia this October.

ONE Championship will return to Jakarta, Indonesia with Dawn of Valor next month. When it does, it will bring with it two title fights — plus the debut of one of its biggest free agent signings, John Lineker. The promotion officially announced the event via press release on Thursday.

Atop the Dawn of Valor card will be a welterweight title fight between Swedish champion Zebaztian Kadestam and Kiamrian Abbasov of Kyrgyzstan. Kadestam (12-4) captured the title against Sikjitsu fighter Tyler McGuire back in November, and has defended it once, against Georgy Kichigin this past March. ‘The Bandit’ is currently on a three-fight win streak, and has not lost since his first title bid against Ben Askren in 2017.

Abbasov (21-4) is also on a three-fight win streak, including victories over Agilan Thani and UFC veteran Yushin Okami. At 13-1 in his last fourteen bouts, Abbasov poses a credible threat to the champ. His only loss of late came to Brazil’s Luis Santos.

In the co-main event of Dawn of Valor, ONE Lightweight Kickboxing World Champion Regian “The Immortal” Eersel of The Netherlands will put his title on the line in a rematch against countryman Nieky “The Natural” Holzken. Eersel defeated Holzken to win the inaugural lightweight title back in May.

MMA fans will have their eye on this card for another reason, however. UFC veteran and top contender John Lineker will debut at Dawn of Valor, taking on Muin Gafurov. Lineker was a top flyweight and later bantamweight contender in the UFC, although weight and health issues served up frequent setbacks for “Hands of Stone.” Lineker (31-9), however, is expected to eventually collide with Demetrious “Mighty Mouse” Johnson, though the pair currently compete in different weight classes.

In any case, Lineker will start his tenure at ONE Championship against Gafurov (16-2). The Tajikistan native will come into the fight having won five straight.

Rounding out the bout announcements for Dawn of Valor are the following:

ONE Championship: Dawn of Valor takes place October 25, 2019 at the Istora Senayan in Jakarta, Indonesia. Additional fights are expected to be announced at a later date.

ONE on Prime Video 4: Abbasov vs. Lee Live Stream and Results 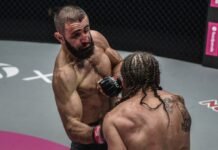 Kiamrian Abbasov Misses Weight, Stripped of Welterweight Title Ahead of ONE on Prime Video 4