Khabib Nurmagomedov led the way among the UFC 242 bonus winners, as four fighters including the champ picked up Performance of the Night awards.

UFC 242 went down in the heat of Yas Island, Abu Dhabi on Saturday. The PPV card was topped by a lightweight title unification bout between returning champ Khabib Nurmagomedov and interim champion Dustin Poirier. The headliner did not disappoint — nor did The Eagle. While he would be in trouble once or twice during the bout, he managed to put Poirier away in the third.

The submission win, via rear-naked choke, improved Khabib to a perfect 28-0, nearly unheard of in the sport of mixed martial arts. It was impressive enough to earn the champ a post-fight bonus as well, one of four Performance of the Night bonuses.

With no Fight of the Night being handed out (with apologies to Paul Felder and Edson Barboza), Khabib, along with fellow Russian Muslim Salikhov led the way in the bonus department. Salikhov earned his on the early prelims, with a knockout of Nordine Taleb.

Ottman Azaitar also picked up a Performance of the Night award, for a thunderous and downright scary knockout of Teemu Packalen. The force of the blow left Packalen face-down, twitching on the canvas while unconscious. Luckily, he was standing by the time the winner was announced.

Last but not least, Belal Muhammad picked up the final Performance of the Night award. He earned that via a rear-naked choke submission of Japan’s Takashi Sato. 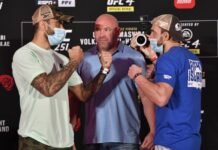