Another week in MMA brings with it plenty of prospects to keep an eye on, including fighters throwing down under the M-1 and LFA banners.

A couple of cards, from LFA and M-1 among others, played host to a number of MMA prospects this week. We’ll take a look at the standouts below!

Bogatov is a Russian prospect who has burst onto the scene quickly after starting his MMA career in 2016, already winning M-1 gold. Bogatov is solely a grappler. On the feet, he isn’t bad, but is just unpolished with his striking and defense needing work. The Russian is aggressive from bell to bell and will constantly press forward and secure takedowns with exceptional cardio. His grappling is top-notch as he is willing to give up takedowns due to his scrambling abilities, and ability to gain top position.

Bogatov wants to be on the mat as that is where he is very dangerous with his ground-and-pound, and where his positional grappling ties up his opponent’s limbs while firing punches. He’s always attacking submissions and he has four subs on his record, which is the best aspect of his skill-set. He fights former UFC fighter Mickael Lebout (19-9-3). A win here could get Roman to the UFC.

Only 5-0 in MMA, Shamil has a lot of hype behind him. Shamil trains with a solid camp out of Russia, Eagles MMA, where he works with Movlid Khaibulaev, Akhmet Aliev, and more. Shamil has a background in kickboxing being a world champion. In only five fights, he’s fought Yuri Gobenko, Yuriy Protzenko, and Charles Andrade that have a combined over 140 fights which is a good start for someone just embarking on their career. Abasov has showcased his kickboxing skills throwing damaging leg kicks and even has a head kick knockout. He has also shown solid wrestling with heavy top position. He is definitely someone to watch for. He fights Rizvan Kuniev (5-2-1), who he should beat.

Following a two-fight skid Vanderaa is now on a three-fight win streak and won the EFC heavyweight title. On the feet, Vanderaa throws good combinations and does a solid job throwing heavy leg kicks. With the top position of a mountain, Vanderaa is at his best on the mat. He has decent grappling for a heavyweight but it’s his ground and pound that has made him successful. There are some doubts as to whether he’s UFC level though. He fights Renan Ferreira (5-2) who is likely the favorite.

Russia’s own Pshukov is a good talent and has shown to be well-rounded. On the feet, he has a dangerous right hook and throws good combinations. He’s even better on the mat with his effortless grappling including very smooth transitions. The wrestling to get it on the mat has shown to be excellent, executing single and double legs very well. Pshukov has wound up on his back at times but thrives in scrambles. He’s looked solid but needs a step up in competition. He fights Ruslan Abiltarov (21-9-1) who has a lot of experience, so he might get that here.

Another Russian flyweight  prospect making the list is Murad Magomedov. Solely a grappler, Magomedov is well-versed on the mat. A tall flyweight standing at 5’9″ he uses his length well. With a strong jab, his length is more useful to him on the mat. He’s really good in transitions taking the back consistently. A bit green still but he is a really slick grappler. He fights Felipe Silva (10-3) which is his biggest test to date.

Evgeny Goncharov is another solid heavyweight prospect out of Russia. On the feet, he does have some power, but on the mat is where he wants to be. Goncharov is an excellent wrestler who will get the body lock and get huge power takedowns, showing how strong he is. On top, he has some slick grappling for a big guy, but his ground-and-pound is his best aspect where he throws at a high rate and can do that all fight. He fights Tony Johnson (13-4-1), who is a veteran but shouldn’t beat Evgeny.

Muslim Magomedov had a huge win in his last bout beating former UFC fighter Chris Camozzi. With not much to offer on the feet, Magomed is an excellent wrestler. His timing on his shots is fine and the way he shoots so low makes his execution near-perfect. The work he does on top is his best aspect. He’s got good top position and his ground and pound is strong, active, and lands hard. He fights Ilya Shcheglov (8-1) is not all that impressive to date. 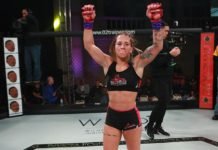