There’ll be little rest for Ian Heinisch, as he’s been booked to return against Brad Tavares at UFC Singapore.

Ian Heinisch is coming off his first loss under the UFC banner, but he’s not wasting any time trying to bounce back. Heinisch will reportedly take on Brad Tavares at UFC Singapore this October, in a booking made less than two weeks after Heinisch’s fight with Derek Brunson at UFC 241.

ESPN was first the report news of the match-up.

Heinisch (13-2) jumped onto the UFC’s radar off a Contender Series win, then quickly pulled off two wins in the middleweight division. His redemption story, as a convicted drug trafficker who found both fighting and God, played big in his promotion, and went over well with fans. Wins over Cezar Ferreira and Antonio Carlos Junior didn’t hurt either.

After losing for the first time in the UFC to Brunson, a unanimous decision, he gets Tavares, another veteran. Tavares (17–5) has been with the UFC since 2010, and had run up a four-fight win streak prior to his last bout. However, that happened to come against Israel Adesanya, so clearly it did not go Tavares’ way.

The Hawaiian hasn’t fought since that July 2018 meeting at the Ultimate Fighter 27 Finale. 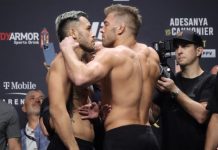 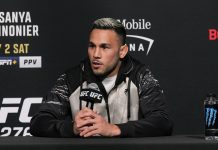