A  pair of debuting bantamweights collide early on the UFC Shenzhen (UFC Fight Night 157) card later this month, as Batgerel Danaa and Heili Alateng face off.

The UFC is coming to Shenzhen, China inside the Universiade Sports Centre on August 31. The card is headlined by UFC strawweight champion Jessica Andrade defending her title against rising star Weili Zhang. There are already eight debuts slated, two of those being scheduled to fight each other as Batgerel Danaa and Heili Alateng will do battle in a bantamweight bout.

How will Danaa fare in the UFC:

Danna started his MMA career in 2011 and with only seven fights his strength of schedule has been poor. He does have a key win over UFC flyweight contender Kai Kara-France however.

In his sole loss nearly four years ago, he was simply outpointed in a decision. Danna is a striker first who does have decent wrestling and better ground and pound. He is a better counter striker who does well slipping punches and firing with his right hand. The Mongolian tends to be drawn into firefights often. While that is exciting and he does frequently find success, his head sits on that center line and he takes unnecessary damage. With Danaa, you will see him throw one to three punches and reset every time, making him too easy to read. His takedown defense at times is good but when it comes to chain wrestling defense that’s where he comes up short. He’s a good striker in terms of power and placement but lacks fundamentals.

How will Alateng fare in the UFC:

Alateng is a veteran who has twenty total fights, and despite many setbacks, he’s won his last two. Where Alateng is best at would be his wrestling. His timing on his level changes is good and if he doesn’t get the initial takedown at first he will chain it together and get the fight down eventually.

Alateng does a great job getting the double underhooks, utilizing the body lock, and getting throws and trips. On top, he has good positional control and some strong ground and pound. Alateng has grown a lot on the feet, throwing with increased output and combinations. The Chinese fighter has a lot of power in what he does throw, particularly his right hand, which has dropped many fighters throughout his career. He will tend to brawl and not being the fastest he’s been caught and dropped at times. Although he has improved in his cardio he still tends to slow as the fight goes. Prediction: 2-2 in his first four UFC fights.

No one was expecting these two signings to the UFC at this point and while both are not exactly UFC level, this could still be a solid fight. All the signs point to Alateng winning. He has much more experience and has fought superior competition. Danaa is the more precise striker but Alateng is faster and more explosive, plus has the knockout power advantage as well. The biggest advantage in this fight should be the wrestling of Alateng. Danna struggles with takedown defense and even more fighting off his back. Alateng being the much more physically strong wrestler/grappler should be able to switch to cruise control once he closes the distance. 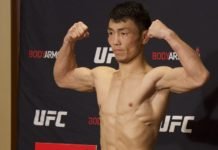 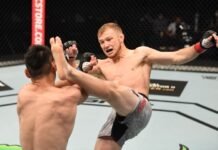