Ricky Bandejas was on top of the world after beating James Gallagher in his promotional debut, but now it’s back to the drawing board at Bellator 225 after two straight losses.

Ricky Bandejas looks to snap a two-fight losing skid this weekend at Bellator 225. Ahmet Kayretli will stand across the cage from Bandejas this Saturday. The bantamweight bout goes on the preliminary portion of the proceedings. The August 24 event goes down at Webster Bank Arena in Bridgeport, Connecticut. Cageside Press got some time with Bandejas to discuss all things Bellator 225.

Bandejas gets ready to face an opponent with a winning LFA record. Kayretli has notable experience on the regional scene and is presumably hungry as he’s making his Bellator debut against Bandejas. Ricky Bandejas said, “He’s got a lot of experience. From what I hear he has over 200 combat-kind of fights. He’s got good standup. He’s going to come ready to fight. I’m on a two-fight losing streak so this makes this fight huge for me.”

Bandejas took L’s recently to Juan Archuleta and Patrick Mix. Bellator 225 marks a bit of a make or break moment for the star that went viral for his sweet chin music on James Gallagher. Both of those losses took place this calendar year. Bandejas is looking to notch his first W of 2019 and get to a .500 record in Bellator MMA. He realizes the moment that lies ahead of him and has adjusted accordingly.

Bandejas decided that he would make a move to American Top Team after feeling pressure to shift his methodology. He stated, “I lost two in a row. When you’re winning you never really pull the trigger. I guess I need some change here. Something’s not working and that was pretty much the overall idea on why I jumped ship.”

Bandejas was at Nick Catone’s gym prior and there was no bad blood at all once Bandejas changed course a bit. He said, “Nick’s good, he’s a good coach, lots of great training partners. Great gym overall but ATT’s really nice too. There are two dozen people around my weight you can mix it up with. All top-level guys. Hopefully, this is going to help me just elevate my game.”

There’s not just the move of the training environment but there could be a looming move in weight classes. Bandejas has indicated some level of interest in jumping up to be a 145er as a possible goal down the line. He said, “Whether they offer me a fight 35/45, I’m always taking the fight. I’m a pretty big 35er. So I think going to 45 wouldn’t be too big of a jump for me. Once I figure out how to take over this 135-pound division, get that belt, I’m down to jump to 145 and do the same thing there.”

Getting Back on Track

Bandejas had quite a quick turnaround around since last fight. The loss to Patrick Mix occurred on June 14 and Bandejas is stepping back in a bit over two months later. He said, “I just hit the ground running. I took a week off or so to just soak in my sorrows but got back on the horse and got this fight. The Pat Mix fight I took no damage, it happened so fast, it’s the name of the game. So instead of sulking about it, I may as well get back in there and get a win.”

Getting to hang out with his wife and kids all day motivates Bandejas in a big way. They’re everything for why Bandejas does this and provides a ton of motivation to get back on track. Bandejas also seems to thrive from the hometown support he gets in Brick, New Jersey. He stated, “It’s cool, man. Brick is a small town, you know? Everybody knows each other within it and everybody supports each other. Everybody seems to get on board ad just push and support each other.”

Bellator 225 is days away but with the crossover between Bellator and Rizin as of late, I had to gauge Bandejas’ interest in getting a fight in Japan. He said, “Send it, I’ll go to Japan and fight. That would be cool. That’s another bucket list thing. It’s a little f**ked up and inhumane if you ask me. How you can soccer kick people and step on them? But it’s the name of the game, you know? Sign me up.”

Before any trips can be made to the land of the rising sun, Ricky Bandejas first has to take care of business in Bridgeport. Bellator 225 goes down on August 24 live on Paramount Network. Saturday’s main card starts at 9 p.m. EDT but you can check out the prelims at 5:45. 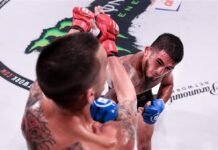 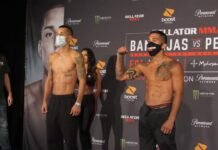 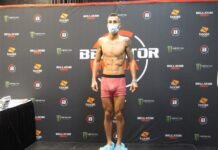