RIZIN 18: Horiguchi vs. Asakura was live on Sunday, August 18, 2019 from Nagoya, Japan. The results are below.

RIZIN 18: Horiguchi vs. Asakura live from the Dolphins Arena in Nagoya, Japan. The event was broadcast live on FITE TV.

In the main event of the evening, RIZIN and Bellator bantamweight champion Kyoji Horiguchi returned to Japan, when he took on fellow Japanese fighter, Kai Asakura.

Horiguchi (28-2) entered the contest just two months after defeating Darrion Caldwell for the second time at Bellator 222 (we spoke with him prior to the event – watch here). Since joining the Japanese promotion in 2017, Horiguchi had gone 9-1 in the promotion, only losing to Tenshin Nasukawa in Kickboxing.

Asakura (12-1) had gone a perfect 4-0 in RIZIN since debuting back in December of 2017. Among his RIZIN stint, he has beat Manel Kape and Thaongsalek Tiger Muay Thai in back-to-back bouts. Most recently, Asakura redeemed his only professional loss when he defeated Je Hoon Moon via unanimous decision last September. Despite going to the judges in his last three fights, Asakura has nine stoppage wins, seven via knockout.

Also on the card, super atomweight champion Ayaka Hamasaki was back in action. DEEP bantamweight champion Victor Henry and former UFC flyweight Jarred Brooks made their promotional debuts. Additionally, John Wayne Parr competed in kickboxing – where he looked for his 100th professional win. 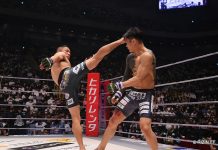