Umar Nurmagomedov was icing an injury following his win at PFL 6 2019 on Thursday, but expects to be back to training with cousin Khabib soon, with the plan being to fight one more time this year.

Atlantic City, NJ — Umar Nurmagomedov improved to a perfect 11-0 at PFL 6 on Thursday in Atlantic City. The sixth show of the league’s 2019 season featured heavyweights and light heavyweights — plus Nurmagomeodv, cousin of UFC lightweight champ Khabib, in a featured bantamweight fight against Sidemar Honorio.

The unanimous decision win was a decisive one for Umar, and while Honorio isn’t a household name, the bout aired on ESPN+, which is also home to the UFC — meaning the potential for plenty of eyeballs on the 23-year old fighter.

Following the bout, Nurmagomedov was seen icing his knee as he spoke to media outlets including Cageside Press. Not to worry though. “Just need time, and ice. One week, and I can train,” he said, referring to it as a muscle problem, rather than something more serious, like a knee injury.

Asked about whether he felt he had to live up to the Nurmagomedov name, Umar said that “before yes.”

“Before everybody think it was interesting,” he said, in regards to the family fighting. In addition to Khabib and Umar, Abubakar Nurmagomedov also competes in MMA, as does Said Nurmagomedov, who Khabib has referred to as brother, but is not a blood relative.

“We train all the time together. This training camp, like before,” he added in regards to training with Khabib. “It was nothing new [for me]. Another fight in my career.”

Despite the Honorio fight being just a regular fight, Nurmagomedov was rather harsh on his performance. “I need more training, I’m not impressed with my performance,” he told reporters. “Not my best performance. I see some gaps in my style. I need more boxing, I need to train more.”

Moving forward, he’d be interested in joining a PFL tournament. “If they include my weight,” that is. Bantamweight does not currently feature in the PFL. For now, the plan is to fight one more time this year, though as to when, Nurmagomedov wasn’t sure. 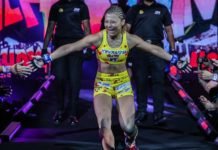