Bellator prospect and Taekwondo Master Valerie Loureda will be part of the upcoming season of Spanish reality show Exatlon on August 19.

Taekwondo Master and Bellator’s popular prospect Valerie Loureda will be part of the third season of Spanish language reality show Exatlon on Telemundo on August 19.  Similar to The Challenge on MTV, Exatlon features contestants being split into two teams and competing in a serious of physical and mental challenges over the course of several weeks.  The show notably secludes contestants from the outside world and social media over the course of filming.

The 21 year old Loureda enters the competition with the advantage of having two teammates, Yoel Romero and Jorge Masvidal, having already been on the show and gone far into the competition on their respective seasons.  Masvidal made it to week 13 last year while Romero made it several weeks this past season before inflammation in his knee forced him to withdraw.

Exatlon is known as being one of the most popular programs on Spanish language television with the show being adapted in several countries worldwide.  The three hour finale of the second season in May was the highest rated program on Spanish language television to air that evening.  Along with Loureda, other celebrity contestants that have been announced are current Mexican soccer player Norma Palafox, former NFL safety José Gumbs, American Ninja Warrior alum Mack Roesch, and others.

Loureda last fought at Bellator 222 in June where she defeated Larkyn Dasch by unanimous decision.  Her season of Exatlon is set to begin on August 19 and will air on Mondays at 7PT/6C on Telemundo. 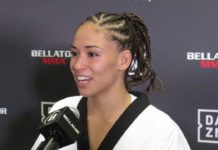 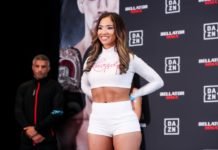