Clay Guida got the fans into it, while Colby Covington and Robbie Lawler chose not to work out at Wednesday’s UFC Newark Open Workouts.

Newark, NJ — The UFC’s stop in New Jersey this week has been a little bit different thus far. Wednesday’s open workouts were the only chance to really see much of the headliners prior to Saturday’s fight, with the promotion opting to skip a media day for the event. With the UFC Newark show starting early Saturday, a rare afternoon outing on ESPN, that gives the fighters less to worry about as they cut weight. It also put an increased focus on the open workouts, however — but both main event players, Robbie Lawler and Colby Covington, opted to skip actually working out.

Covington more or less skipped out on speaking to the press after, answering just a few questions before making his leave with a trio of ladies who just happened to be in the crowd waiting for him. Colby will be Colby, of course. And he did take photos with fans on the way out, so points for that.

In the meantime, Clay Guida, Mickey Gall, and Jim Miller actually did work out Wednesday. You can catch some of the highlights from that below! Guida and Gall even had the fans get involved a bit.

UFC Newark (UFC on ESPN 5) goes down Saturday, August 3 at the Prudential Center in Newark, NJ. 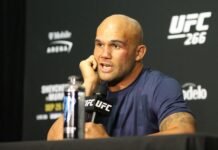 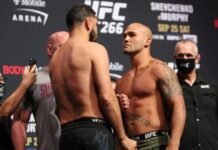