Aalon Cruz knew within seconds of his flying knee victory at this week’s Contender Series installment that he was in the UFC.

Las Vegas, NV — Another week, another knee — it seems like there’s been a lot of them this season — and another fighter signed to the UFC. That seems to be the story with the Contender Series of late, and this time out it was Aalon Cruz, one of four fighters signed off the sixth installment of season three.

Can you really blame Dana White for this one thought?

Following the fight, Cruz spoke to reporters including Cageside Press, and told us that he was feeling great. “I’m on cloud nine. When I looked at Dana and gave him the signature sign, and he looked back at me and was like ‘yeah,’ I was like ‘oh sh*t. I don’t really have to think about whether I’m in or not, he just basically told me.'”

That highlight reel finish of Steven Nguyen, a flying knee with emphasis, will be replayed over and over for months if not years to come. But with just thirty seconds remaining in the fight, Cruz admitted that he wasn’t sure what the outcome would have been had it gone the distance.

“To be honest it’s hard to tell how the fight’s going when you’re in there,” he said. “I guess it could have gone either way. I thought I was landing maybe the hard shots, but he was obviously controlling the octagon. He was walking forward a little more.” Not the scenario Cruz had planned for while training for the fight.

“My entire game plan was to not let him walk forward, which is kind of hard to do with a guy who, that’s his game, that’s what he does,” Cruz explained. “But that kind of maybe was his downfall at the end. I knew it was that last 30 seconds, it was kind of a close fight.”

Early in the fight, Cruz had come close on a couple of similar opportunities. But with just under thirty seconds to go, he made no mistake. “When I hit him this time, I didn’t think he went out, but then I saw him fly back. I was like ‘oh, sh*t let me jump on top.'”

“It worked out,” he said. Noting the toughness of his opponent, he later added that “every time I threw something, whether it was a kick or a punch, he was always countering. He was very good at countering. I could never throw a combo, or a kick or something and just let it be a free combo. There was nothing free in there.”

Watch the full post-fight press scrum with Aalon Cruz above! 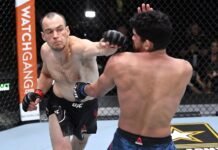 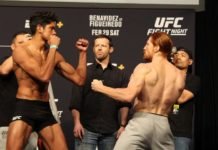