The UFC Mexico City main event is set, as the show will feature popular featherweights Yair Rodriguez and Jeremy Stephens.

During Saturday night’s UFC 240 broadcast, the promotion revealed a large chunk of the card for their return to Mexico City. Including the headliner. September’s UFC Mexico City main event will see Mexico’s own Yair Rodriguez face off with Jeremy Stephens. The fight will be a return of sorts for Rodriguez, who has not fought since UFC Denver last November.

Rodriguez (11–2) threw up a Hail Mary elbow at the end of his fight with the Korean Zombie that night. Almost certainly on his way to defeat, that upward elbow knocked out Zombie in the final second of the final round of the five round affair. End result, an incredible moment that earned a Performance of the Night bonus on top of Fight of the Night.

Overall, Yair Rodriguez is 7-1 in the UFC, with his only loss coming to Frankie Edgar at UFC 211. That fight was almost universally seen as too much, too soon for a fighter still considered a prospect.

He’ll get another tough test in Jeremy Stephens, however. Stephens (28–16) is a longtime UFC veteran with the promotion over a decade. He debuted against Din Thomas at UFC 71 in 2007, and has remained a constant fixture, embarking on an impressive run from 2017 to 2018 with wins over Gilbert Melendez, Doo Ho Choi, and Josh Emmett. However, ‘Lil Heathen’ has dropped his last two fights, to Jose Aldo and Zabit Magomedsharipov.

The loss to Aldo sent Stephens reeling, and the fighter later admitted he contemplated suicide.

For more on the event, stay tuned to our UFC Mexico City event page. 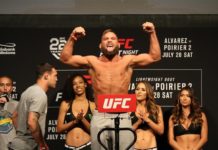 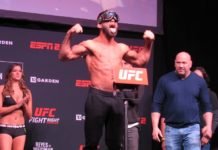