A pair of women’s flyweights make their debut at UFC on ESPN 5 this weekend, as Hannah Goldy and Miranda Granger face each other.

The UFC is coming to Newark, New Jersey right around the corner on August 3. With the card suffering a few blows, the promotion has had to add another fight to fill out the event. And so it was announced that a pair of newcomers in Hannah Goldy and Miranda Granger will do battle, making their debuts against one another at UFC on ESPN 5.

How will Goldy fare in the UFC:

Goldy (5-0) is coming off a win a few weeks ago on the Contender Series, and had a dominant performance against Kali Robbins. Although there’s an argument to be made that she deserved it, she didn’t get the contract. She has one now, however. Goldy is a striker at heart who really has no intention of taking the fight down, and she also has strong takedown defense. She’s very technical with her striking throwing jabs, hooks, and throwing at good angles. Goldy does a solid job mixing in punches and kicks and does that with consistently strong output when it comes to combinations. It would be nice to see her be a bit more aggressive with those combinations, as they’re usually in brief burst and then resets. Her takedown defense as mentioned has looked good, but it may still become a concern when she fights a high level wrestler. Overall a great signing and one that has a lot of potential.

How will Granger fare in the UFC:

Granger (6-0) is another young talent who deserves a spot on the UFC roster. She is mainly a grappler and a big submission artist. Granger has five submissions in six fights, proving that is her strong suit. Her grappling as a whole is solid and that’s even off her back. On the feet, she has good movement and leg kicks. Granger, though, lacks much in the way of striking output failing to put combinations together. Hers BJJ is good but her wrestling isn’t up to par as much as it should be. All her success on the mat has come from the clinch, getting takedowns but many times getting taken down herself and just getting back the position. You may see her struggle against wrestlers, as her takedown defense isn’t great. Being so raw on the feet, she may also struggle with strikers. Granger is a good talent but this may be too much too soon.

It’s a clear striker vs grappler pairing as Goldy has a huge advantage on the feet and Granger has the slicker BJJ. If Granger had good wrestling to go with her BJJ she would be a favorite in this fight. But instead, Goldy is faster, more technical, stronger, and much better on the feet. A relatively confident pick here is Goldy. 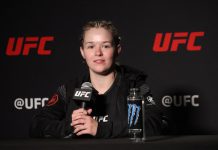 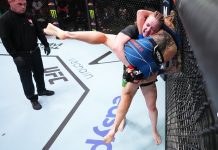