Gavin Tucker gets back in the win column at UFC 240, with a submission win over Seung Woo Choi.

Canada’s Gavin Tucker looked to rebound from his first professional loss, when he took on Seung Woo Choi at UFC 240.

Tucker is 1-1 in his UFC career, but suffered a brutal beating last time out. Tucker lost a unanimous decision to Rick Glenn, with scorecards of 30-24 and 30-25 being amongst them. Joe Rogan and Daniel Cormier were asking to the fight to be stopped on commentary. Will Tucker be able to bounce back from such a brutal beating, or will he fall to back-to-back losses in Canada?

Choi is also coming off a unanimous decision loss in his most recent showing. The Korean fighter lost to top-prospect Movsar Evloev in Evloev’s home country of Russia back in April. The 26-year-old looks to score his first UFC win, once again on away soil.

Both fighters touch gloves to start off. Both men throwing kicks early. Choi used his range well early, as Tucker was looking to how close distance. He did that seconds later, as he landed a single leg takedown. Tucker took Choi’s back early in the first round but lost control of the hooks. Tucker attempts another takedown and manages to get Choi down. Choi gets back to his feet but Tucker continued to wear on the Korean. Choi landed a big knee after managing to escape the ground attack of Tucker. Tucker landed a leg kick but ate a right hand. The round ends.

Cageside Press scored the round 10-9 Tucker.

Choi was aggressive to start the second round. Tucker had the single leg but Choi managed to get back up but Tucker is wearing on him against the cage. Choi landed a solid elbow on the exit and Tucker returned with an overhand left. Tucker gets a takedown after Choi missed with a spinning back fist. Tucker landed an illegal knee and Marc Goddard deducted a point from Goddard. The action continued as Choi attacking the body of Tucker. Tucker landed kicks of his own.

Cageside Press scored the round 9-9.

Tucker attempted to take Choi down early but Choi managed to keep his balance. Choi looked very fresh in the third round and conintued to press forward. Tucker manages to clinch Choi again. Choi got his own takedown but Tucker got back up and then got his own takedown and took Choi’s back. Tucker attacks the submission and gets the rear-naked choke victory over Choi. 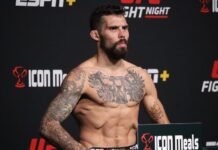