Maria Silva looks to improve her record to 4-0 at Future FC 7, and we got to know more about her motivations as a fighter amongst other topics.

Future FC, ever since making its debut at the beginning of the year, has become one of the best, most underrated promotions today. It has already given many prospects recognition and Maria Silva could be the next. Get to know all about the Brazilian in her interview with Cageside Press.

I practiced another sport before in Sanda (Kung Fu) and I won everything I competed in, I became multi-champion. Then, I saw that I had to look for more growth and came to the great invitation of the master. He and one of the athletes, former UFC fighter Viviane Sucuri, came to my city (Santana do Cariri) to watch a Sanda competition. Then they invited me to train with them and I moved to the capital (Fortaleza), where I started training MMA and other sports. So it was a matter of time to debut professionally …

Do you have any background in any other sports?

Not professionally, but I play basketball and soccer as a hobby.

Do you supplement your MMA career with other work?

No, I only help the gym’s bodybuilding area during free time. But most of the time, I only really train.

What is your list of accomplishments such as titles, belt ranks, etc…?

I am a multi-champion of Sanda and a Muay Thai champion at Strike Down and Rainhas da Luta. I’m also an MMA champion in NFC MMA and a kickboxing champion in Prime kickboxing.

The best moment of my career was when I won the belt of the NFC MMA. The event was outside my city, I accepted the fight days before above my weight class. It was totally challenging! But it all worked out, I played a technical and speed game. The hardest moment was when I broke my wrist still fighting as an amateur. Because of this, I had many difficulties because my city is small and it took me a long time to get surgery. But in the end, it all worked out.

You have a big fight coming up this week for Brazil’s biggest promotion Future FC. You’re fighting Jainne Lais another undefeated fighter. How do you see this fight playing out and how do you think you two match up against each other?

I know little about her, but we know the basics to work with. We have to be careful, but we are not used to training on the opponent’s game. We keep a strong and constant training pace to impose my game and be ready to fight in any area.

You’re still so young in your career so is the UFC on your radar already or is it more important to get more experience first?

I am always humble and working hard so that one day I can have this opportunity in the UFC and not leave there anymore. I’m young, but I’m making a whole base to get strong in all areas! My mind is ready! I want to fight with the best wherever it is.

If you wouldn’t be fighting what would your life look like?

Maybe without much life expectancy, working in the countryside, helping my mother in agriculture.

Because it is something I love to do and it was something that changed my life. I fight for my family, to someday give good conditions to them. I have high expectations for Future FC MMA. I am always aiming for great opportunities. And Future FC is a great opportunity. 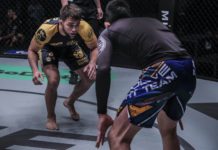