Surging contender Leon Edwards looks to get his eighth straight victory and break into title contention with a victory over former champion Rafael dos Anjos at UFC San Antonio.

In a testament to the skill level and star power of the UFC welterweight division in 2019, several fighters riding win-streaks more than five victories long are not even in the top five.  At a time when there is a lot of movement in the division, surging contender Leon Edwards hopes to use former champion Rafael Dos Anjos to springboard himself into the title conversation at UFC San Antonio.

He only needs 1️⃣ shot to end your night!

For a moment, it appeared that we were watching the door close on Rafael dos Anjos ever returning to title contention.  He had dropped two-straight, to Kamaru Usman and Colby Covington, and a wave of contenders from Jorge Masvidal, Ben Askren, and more were surging ahead in the rankings.  The fight with Kevin Lee in May was a crossroads bout.  Could dos Anjos prove he was still capable of fighting at the elite level or would the game seemingly pass him by as he lost to a younger competitor?  The Brazilian contender went on to counter-punch all the critics, throttling Lee with a fourth round finish.

Enter the fight with Leon Edwards, the surging contender on a seven fight win-streak whom Dos Anjos agreed to fight on roughly a months notice.  The Englishman is a dark horse in the welterweight division.  A win for dos Anjos would set up fights with the other major players in the rankings such as Darren Till, Elizeu Zaleski dos Santos, and Stephen Thompson.

For Leon “Rocky” Edwards, the upside is tremendous as he faces an opponent familiar to the casual fan in his second UFC main event.  UFC President Dana White has said on multiple occasions that he considers dos Anjos the benchmark for fighters looking to prove they are ready for the next level.  Should Edwards notch another victory, his eighth straight, it would be difficult to deny him a top contender bout to cement his place in title contention.

Currently, Edwards is tied with Elizeu Zaleski dos Santos and Santiago Ponzinibbio for seven straight victories in the UFC.  Only the champion, Kamaru Usman, has more in the division.  Ponzinibbio is currently out with an injury while dos Santos is scheduled to take on the more lightly regarded Li Jingliang in August.  By far, Edwards is ahead of the other two on the strength of his schedule and an impressive performance against Dos Anjos would set him well apart from the other two.

Stylistically, Edwards should look to attack with volume and follow the strategies used by Colby Covington and Kamaru Usman to wear on the former lightweight champion against the fence.  Edwards is taller and has more reach and should look to work behind the jab and straight punches.  Defensively, he must get out before the Brazilian loads up on his vaunted kicks or counters as he does impressive damage when at mid-range.

Dos Anjos should look to use his multi-faceted attack to overwhelm Edwards.  He should look to hamper the mobility of Edwards early with kicks and follow-up with powerful punches that will further cut away at his stamina.  Should he need to fight with a measured pace early on, he should be confident in his ability to push the pace late if necessary as he has a proven gas tank in 25 minute fights.

The welterweight division is enjoying one of its best stretches in the history of the UFC.  The winner of this bout will likely find themselves in a top contender bout to close out 2019.  Even more crucial, several top contenders in Jorge Masvidal, Colby Covington, and Robbie Lawler are all vying for the next shot at the belt and either dos Anjos or Edwards could find themselves as a back-up or even replacement in the coming weeks if one of the aforementioned individuals is unable to compete. 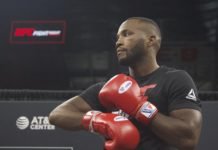 Leon Edwards Out of Fight with Woodley As UFC London Relocates