Dana White’s Contender Series returned Tuesday, and Week 3 of the 2019 season saw a redemption story lined up with Justin Sumter making his second appearance on the show.

The Contender Series is back in action Tuesday night at the UFC Apex in Las Vegas. After a brief sabbatical for International Fight Week and UFC 239, it was once again time to focus on prospect competing for a chance at a UFC contract.

Weigh-Ins went off without a hitch on Monday, at least. Tuesday night, meanwhile, would bring the action. Justim Sumter was a returning fighter, taking on Maki Pitolo after Sumter came up short in his first chance on the Contender Series last year. Would the second time prove to be the charm? Returning fighters haven’t exactly fared well in the show’s short history, but Sumter would look to break that trend, after picking up a win in Bellator back in February.

Worth keeping an eye on, the light heavyweight scrap between Antonio Trocoli and Kenneth Bergh. With 205lbs desperately in need of reinforcements, a strong performance by either man could have Dana White handing out the contract.

Check below during the event for results from all five fights!

Joe Solecki (@joesolecki) def. James Wallace (@jwallacemma) via submission (guillotine) at 3:49 in Round One

Jonathan Pearce (@JSPMMA) def. Jacob Rosales (@lilbadgerrosales) via TKO at 1:50 in Round Three

All five winning fighters from this week’s Contender Series show were awarded UFC contracts, in an unprecedented move! 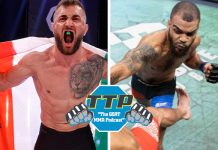