After getting back in the win column at UFC 239, Claudia Gadelha had plenty to say about rivals Joanna Jedrzejczyk and Jessica Andrade.

Las Vegas, NV — After going 1-2 across three fights and coming off a loss to Nina Ansaroff, Brazilian strawweight and former 115lb title challenger Claudia Gadelha got back in the win column at UFC 239 on Saturday.

It wasn’t always pretty, and the fans let both Gadelha (17-4) and opponent Randa Markos know it. It was, however, a step in the right direction for ‘Claudinha’ — who moved camps for the fight.

Recapping the fight with media members including Cageside Press following the bout, Gadelha noted that “when I looked for the takedowns, I saw she was in a very, very low stance. So I just kept standing.”

That led to a bit of a stalemate, or at least a perceived lack of action, at times. It’s something Gadelha anticipated, however. “I expected that, because when she fought Carla Esparza, she did the same thing, so we were waiting for her to do that.”

“She’s tough. Randa Markos is a tough fighter,” she said of her opponent, who joined the UFC via The Ultimate Fighter 20, when the promotion introduced the women’s 115lb weight class. “I knew she was going to be tough, I knew she was going to be in the fight for fifteen minutes. I played my game. Everything I did today in the octagon was new. I added a lot of new things to my game, and I wanted to show that tonight.”

Ultimately happy with the victory, Gadelha added that “I’m satisfied. I won, and Randa is a tough fighter. She fought the best of the best, and she’s been there for fifteen minutes with almost everybody. Almost nobody’s finished Randa.”

Gadelha also got to prove that her cardio is not an issue. “People just don’t know. They say things that they don’t know,” she observed of her critics. “I have great cardio, but sometimes it’s other things that take you out of the fight. It’s been happening to me lately. It happened to me before, it’s not going to happen again.”

Moving forward, Gadelha is looking for a third fight with rival Joanna Jedrzejczyk. Officially, she’s 0-2 against the former champ, but that’s not how she sees it. She even planned to call out Jedrzejczyk following the fight.

Then came word that Joanna was booked opposite Michelle Waterson later this year. “I was a little surprised because I wanted to beat Randa tonight, and call out Joanna,” Gadelha revealed. “Because I feel like it’s 1-1 and we’ve got to do a third fight. Like [Joanna] told me that she knows that. I wanted to fight Joanna, but I was a little surprised when I found out she’s fighting Michelle Waterson now.”

Making her feelings about Jedrzejczyk clear, Gadelha admitted that “we hate each other. I respect her as a fighter, as a professional athlete, but I don’t respect her as a person.” Their relationship did not improve after serving as coaches on TUF. “I spent eight weeks with her on The Ultimate Fighter, and it was a nightmare, the way she is, the kind of person she is. I feel like I beat her the first time. If everybody go back and watch that fight, I beat Joanna. That was a nightmare for my life, because I couldn’t accept that loss. So I really feel like we’ve got to get back in there and do it again.”

As for the current champ, Jessica Andrade, Gadelha called her “a different animal.”

“She’s so strong, so powerful,” Gadelha, who lost to her fellow Brazilian at UFC Fight Night 117 in 2017, said. “I even think it’s not fair for her to fight in the strawweight division, because I’ve been in there with her for three rounds, and I felt like a dude was on top of me.”

Watch the full post-fight press scrum with Claudia Gadelha from UFC 239 above! 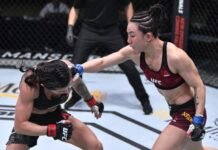